Odia OTT Gets A Thumbs Up At Indian Telly Streaming Awards With Two Winners; Know Them 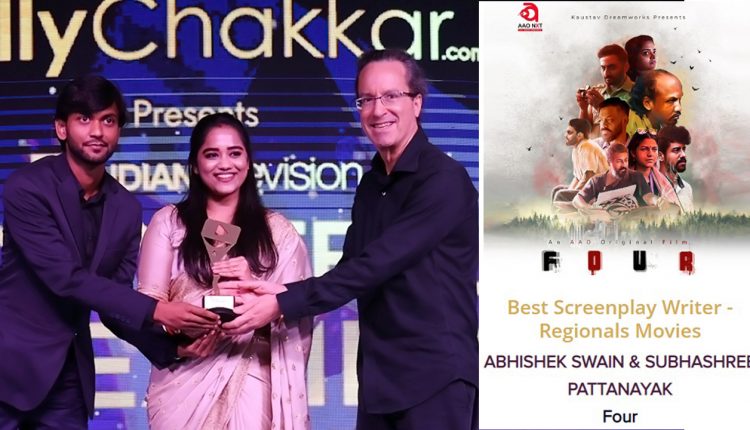 The last three years have indeed been a hallmark for the streaming industry with a record number of OTT content being produced in all languages. It is this wave of talent that Indiantelevision.com attempted to recognise at the Indian Telly Streaming Awards which was held at Mumbai’s JW Marriot on Friday.

‘FOUR’ is an anthology of four different movies, the first-ever to be made in Odia. The entire film has been shot in Bhubaneswar. This film carries four stories – all psycho thrillers, edgy, extricating deep human insecurities, desires, and fragile psychologies, titled The Animal, Paradox, Shadow, and Stranger.

Abhishek Swain received the award of best director for the movie as well as an award for the best screenplay writer along with his co-writer Subhashree Pattanayak.

“Such a concept was never showcased in the Odia industry. We did not expect the response would be so huge after the release. Apart from the people of Odisha, compliments also poured in from other states and countries,” the best director award winner Abhishek Swain told OdishaBytes.

“I was very passionate about films since childhood but never thought would direct a movie ever. This is the first feature film that I have directed,” said Swain.

He also added that these days directors are only thinking about the execution rather than how to direct a movie. “I want to take Odia industry ahead of what it is now,” he said.

Abhishek further mentioned his inspiration, Kaushik Das, the producer and CEO of AAO NXT as well as his co-writer “Subhashree Pattanayak’s strong moral support and encouragement.”

It is pertinent to mention here that Abhishek’s silent short film ‘Life Drop’ won the Best Film Award at the ‘Human Rights Short Film Festival’ held in Bangladesh. His film bagged the first prize among 738 films across 82 countries at the two-day festival, jointly organised by Dhaka University of Film Society and the United Nations of Bangladesh.

Talking about the first award as a screenplay writer Subhashree told OdishaBytes, “All the team members were really emotional after receiving the overwhelming response from the audience. The film was suggested by our producers Ram Patnaik and Kaushik Das. They inspired us to work for this movie which had a positive intuition.”

Subhashree further added that there is a bunch of content coming up. “Some of them are ‘Anthony’, ‘Suka Bhai ra Sholay’, ‘Jajabara 2.0’. “We will be starting soon with ‘FOUR Vol 2’,” she said.

“We want to create our identity on a national level and stand out from the crowd. We are working on a few more projects and would release them soon,” said producer Das.