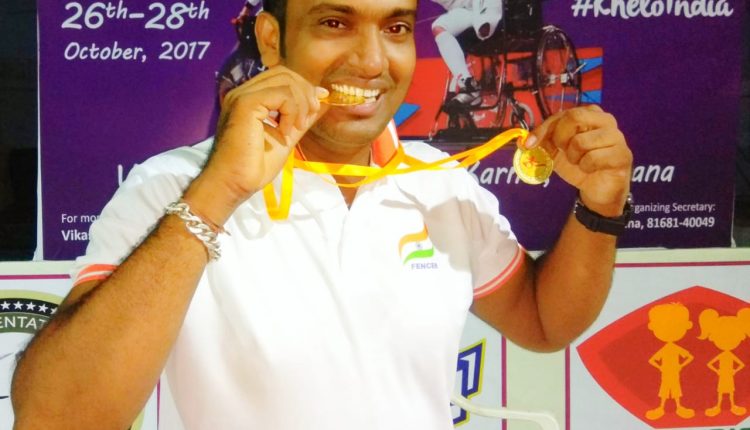 Bhubaneswar: Odia wheelchair fencer Rakhal Shetty is ready to give his best in the World Cup of Wheelchair Fencing at Pisa in Italy, where he is representing India.

India, who open their campaign on Thursday, will face six opponents from countries like France, Italy, Kuwait in pool stage.

“In Italy, fencing is being played for more than 100 years. They are experts. But I will also put my best foot forward. For first few minutes in the game, I will observe their moves and then decide my strategy,” Rakhal said.

Both his legs are affected by polio, but for Rakhal, disability is no hurdle.

A native of Bhadrak, he grew up playing cricket with people who didn’t have any physical disability.

“I never considered myself to be different from others. I performed all tasks like anyone else. When I worked in fields during paddy harvest, my legs would pain but I never stopped,” said Rakhal.

Having lost his father at a young age, Rakhal shifted to Bhubaneswar in 2006. To eke out a living, he started a tea stall in the city. But his love for sports didn’t fade away.

He was attracted to fencing in 2010 when he was watching a national-level tourney in Odisha. A year later, he was himself competing in a national-level meet in Chennai and bagged a gold and two bronze medals.

He never looked back since then.

Having represented the country in 6 World Cups, 2 World Championships, Asian Games and Asian Championship, Rakhal has 36 medals in his kitty so far.

He’ll be hoping to add a few more over the next few days in Italy.