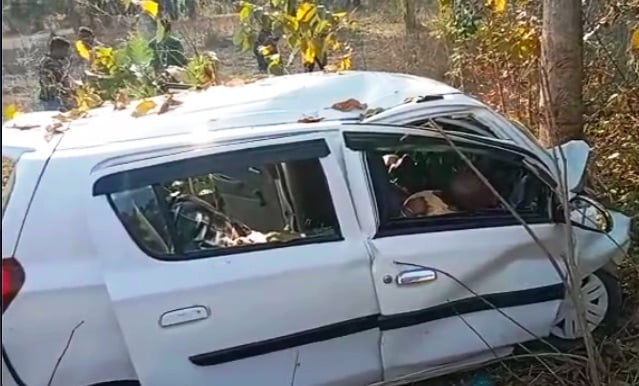 Bhubaneswar: Six persons, including a minor boy, died and three sustained grievous injuries after the car in which they were travelling crashed into a tree near Sunsunia under Sadar block in Odisha’s Nuapada district on Tuesday.

According to sources, the accident took place while the devotees, hailing from Mahasamund in Chhattisgarh, were returning after offering prayers at Nrusinghanath temple in Bargarh district on the occasion of Maha Shivratri this afternoon.

On being informed, Nuapada and Jonk police along with a firefighting team reached the spot and got the injured admitted to district headquarters hospital.

With this, 11 persons have been killed in two separate accidents in Odisha in the last 24 hours. Five had died on Monday night after their car rammed a truck parked on the roadside at Kantiapasi in Angul district.

One person also died and 10 others were injured in a bus-truck collision on Odisha-West Bengal border late on Monday. The deceased and the injured are reported to be natives of Odisha.

[Watch] Maha Shivratri In Odisha: Mahadeepa Ritual At Puri Loknath Temple To Be Held Around 4 AM