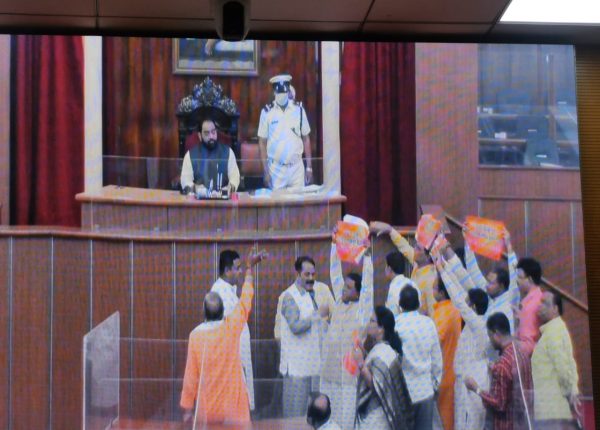 Moments into Question Hour at 10.30 am, the BJP members stormed into the well of the House and sought an unconditional apology from Ajoy for his “unsavoury remarks” and senior Congress leader Rahul Gandhi. The Question Hour lasted for only 7 minutes and Speaker Bikram Keshari Arukha adjourned the House till 11.30 am unable to conduct the proceedings amid the pandemonium.

The members, however, continued to protest outside the House holding banners and placards. The BJP also took out a protest rally in the city from Ram Mandir Square to the Master Canteen Square condemning Ajoy’s statement.

As the House reconvened for Zero Hour, the BJP and Congress legislators were again seen shouting slogans against each other. Following this, the Speaker adjourned the house till 4 pm.

Opposition chief whip Mohan Majhi demanded a censure motion against Ajoy. “Murmu has already proved herself as an abled administrator as a minister of Odisha and governor of Jharkhand. Her contribution to the betterment of tribals is immeasurable. Ajoy’s remarks reflect Congress party’s attitude towards her,” Majhi said.

Congress legislature party leader Narasingha Mishra, however, said since Ajoy and Rahul Gandhi are not members of the House, any discussion on them is against the Vidhan Sabha norms. He further said that his party has been opposing her because of the ideology she represents.

Congress MLA Tara Prasad Bahinipati said there is no reason for Rahul Gandhi to apologise on the issue. “The BJP has not understood properly what the Congress spokesperson said,” he added.

Speaking to reporters outside the assembly, BJD MLA Debi Prasad Mishra said that personal attack on Murmu is condemnable but the House should be allowed to run.

On Wednesday, the Congress leader said that NDA’s presidential candidate Droupadi Murmu represents a “very evil philosophy of India” and should not be made a “symbol of Adivasi.” He further alleged that the condition of the Scheduled Castes has become “worse”.

The statement from the leader not only kicked off a controversy but also gained a sharp reaction from the BJP.

“At a time when the NDA, led by PM Modi, has announced Smt Droupadi Murmu, a woman from Adivasi samaj, as its nominee for the President’s office, a move that will significantly empower the Tribals, Congress leader calls her evil by association! Just because she is a Tribal. Shame,” BJP’s IT cell in-charge Amit Malviya tweeted.

Congress-led Opposition parties former union minister Yashwant Sinha has fielded against Murmu for the presidential elections on July 18. If Murmu wins the election, she will become the country’s first tribal President and also the second woman after Pratibha Patil.