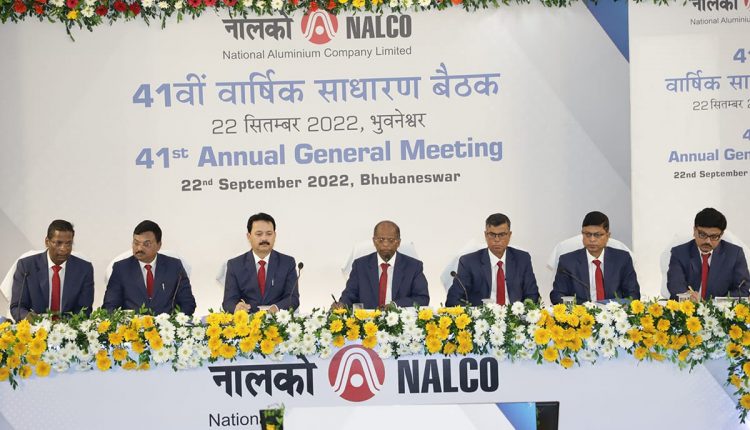 This was revealed at the 41st Annual General Meeting (AGM) of the Central PSU in Odisha capital on Thursday. The Navaratna PSU reported the highest-ever aluminium cast metal production of 4,60,000 tonne by operationalising all its 960 pots at its smelter plant, resulting in 100% capacity utilisation for the first time since inception.

Similarly, its mines and refinery complex at Damanjodi reported the highest-ever bauxite production, registering a benchmark volume of 75,11,075 tonne. The final dividend of 30% i.e. Rs 1.50 per equity share was also approved at the AGM. The interim dividend, totalling 130% of paid up equity share capital, is the highest ever since the inception of the company.

Addressing the shareholders through the virtual platform, Sridhar Patra, CMD, NALCO, said FY 2021-22 was a historic year for NALCO. Apart from higher benchmarks in physical and financial performances, the company broke several past records since its inception.

“The spectacular result is a testimony to the extraordinary attitude demonstrated by NALCO collective in the face of pandemic induced adversity. Despite inflation in various input costs, coal crisis, and uncertainty in LME prices, the company has been able to maintain the status of being the lowest cost producer of bauxite and alumina in the world,” he said.

On the company’s future plans, Patra said it is hopeful of operationalisation of Utkal-D Coal Block in FY 2022-23 which will help ease out the coal crisis faced by the company at present.

Regarding the commissioning and operationalising the caustic soda plant under joint venture mode with Gujarat Alkalies and Chemicals Ltd, he said, “The first consignment has been received at alumina refinery and the operationalisation of the plant will further strengthen the much needed raw material securitisation of a prime raw material for the refinery.”