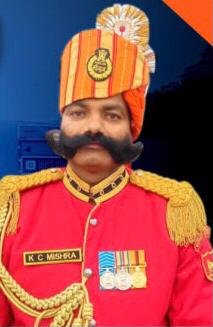 Known for his beautiful moustache, Kanhu was part of the BSF’s Camel Contingent. He has been participating in the parade since 2010.

A native of Soro in Balasore district, Kanhu was appointed as a constable at the BSF’s Jodhpur training headquarters in Rajasthan in 1998. Later, he was promoted as head constable.

Earlier, Kanhu had bagged the first prize for the decoration of camel at the International Desert Festival in Jaisalmer in Rajasthan. He also received the title of ‘Mr Moustache’ in the contest. He has also bagged several awards for his camel riding skills.

Notably, the BSF’s Camel Contingent has been stealing the show at the Republic Day parade in the national capital for several years now.