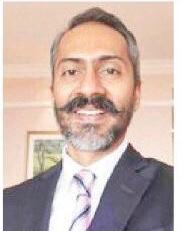 Bhubaneswar: In a proud moment for Odisha, Sushant Dash has been appointed as the CEO of Tata Starbucks.

According to reports, Dash will take charge as the fourth CEO of the global brand’s India operations on May 1.

Dash had graduated in economics from Ravenshaw University in Cuttack in 1994. In 1996, he had joined as Associate Research Director in ORG Marg. Then he joined Tata Tea Ltd in 2001 and rose to become a Senior Manager in Tata Tea Premium.

He has experience in consumer business for more than 20 years and is currently serving as the President of Tata Global Beverages in Bengaluru.

Dash had played vital role in the team that introduced Starbucks brand in India. He has also served as a Director of the global coffee chain brand and as President of Starbucks in 2014. He was also the director of Global Brand.

Notably, Starbucks started its business in India on October, 2012. It has more than 215 stores in 17 cities in India.

Odisha CEO Stresses On Extensive Use Of Postal Ballots In…

COVID-19: No Action Against CEO If Factory Employee Tests…