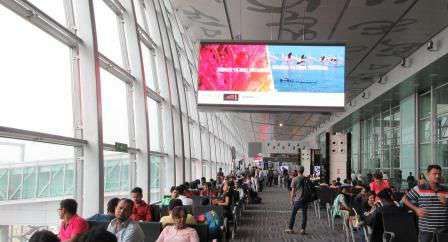 Bhubaneswar: The Odisha Tourism is going all out with its ‘Odisha by Morning, Hockey by Evening’ campaign, promoting Odisha Hockey Men’s World Cup Bhubaneswar 2018.

The campaign hoardings have now been placed at the arrival aerobridge, lower arrival lightbox, gantry outside airport, digital screen at conveyor belt, digital POD across airport and SHA digital wall at the Kolkata Airport.

The campaign, ‘Odisha by Morning, Hockey by Evening’ had received overwhelming response in London, where hoarding were put up on its iconic buses. It was also appreciated at various tourism events and road shows in India and Kuala Lumpur.

“We are perhaps the only state to push the agenda of sports tourism in its true essence. With less than 55 days to go for Odisha Hockey Men’s World Cup Bhubaneswar 2018, we want to push the campaign at every location. We receive a lot of tourists from Kolkata and therefore, we decided to implement the OOH campaign there,” said Commissioner-cum-Secretary, Odisha Tourism & Sports & Youth Services Department, Vishal Dev.

Director of Goddess Advertising, which conceptualised the campaign, Sachin Das Burma said, “The Odisha Men’s Hockey World Cup 2018 is an exciting marketing opportunity for Odisha. With thousands of fans from across the globe and across our country expected to attend this event, this is a wonderful platform to showcase Odisha not just as a sporting hub, but also an amazing tourism destination.”

“The hockey fans are anyways going to come, but we need to excite their friends and family enough to join the trip. Before the fans book their tickets, we have designed a campaign that showcases Odisha as a fantastic tourist destination, encouraging them to come in huge numbers. Odisha has the wares, it’s just a matter of showing them to the world,” he further said.

“The creative idea is very simple. Because all the matches are in the evening, the fans have their mornings free. And that’s our opportunity. To tell the fans that in the mornings they don’t just have to hang around in their hotel rooms, but can experience the magnificent tourist places that we have to offer. In a nutshell-Odisha by morning. Hockey by evening,” he added.