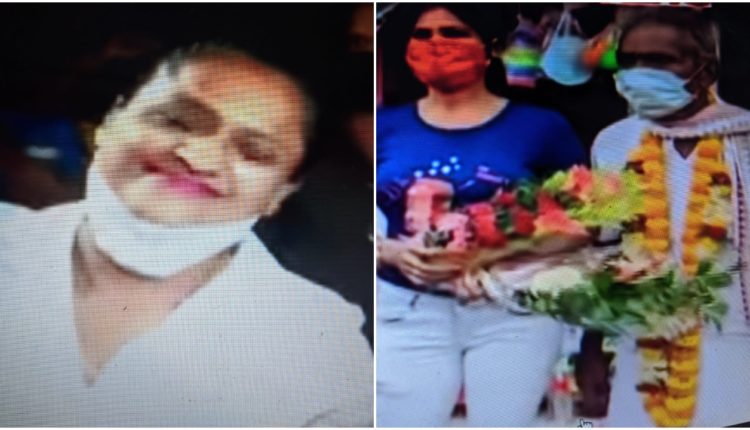 Balasore: Amid the intense tussle between the BJP and BJD for Balasore Sadar assembly constituency, it is campaign trails of 80-year-old Benudhar Barik that are garnering all the media attention.

The reason: Actress Rani Priyadarshini Sahoo and controversial opera artist Rani Panda are campaigning for this independent candidate, who is a barber by profession and has spent nearly five decades of his life under a tree giving haircuts to people.

These celebrities have added glamour to Barik’s lone battle on which he had embarked on with just a poster carrying his picture, name and election symbol fixed on to the handle of his cycle.

Sahoo was seen lifting Benu mausa, as he is fondly called, and seeking votes for him.

She said that he is a candidate with a clean image and there is no politics involved behind her campaigning for him. The other thing that made her walk the streets of Balasore for him was that they both belong to Bhadrak.

Sahoo was joined by Jatra artist Dama Panda, who said he is supporting a good man for the bypoll.

Barik, a resident of Gudipada in Balasore town, became the talk of the state when Panda began campaigning for him about two days ago.

The opera artist, who gained overnight popularity for her sizzling dance moves, has been a controversy’s favourite child. The Commissionerate Police, Bhubaneswar Municipal Corporation (BMC) and Jatra organising committee had banned her troupe Jatra Sachidanandam from staging opera at Khandagiri Jatra Mahotsav over obscene dance.

This move is being seen by many as a strategy to redeem her past and project a fresh image of her. It began in March this year when she contributed Rs 50,000 to the Chief Minister’s Relief Fund (CMRF) for COVID-19.

Both the starlets want people to say no to ‘alcohol and mutton’ (which are allegedly distributed by parties to woo voters) and help Benu mausa win the bypoll, which is scheduled for November 3.

Cyclone Yaas: Youth Critical As Tree Falls On Him In Odisha’s Balasore