The CRRR will provide a parallel connectivity of NH-16 bypassing Khurda town, Bhubaneswar city, Athagarh town, Cuttack city and Choudwar town. It will originate from Rameswar on NH-16, pass through NH-55 at Govindpur and terminate near Tangi on NH-16.

The 111.2-km CRRR is proposed to be developed as 6-lane carriageway including a major six-lane bridge over river Mahanadi. The Greenfield project has been proposed to have minimum effect on forest area, eco-sensitive zones and resettlement of villagers due to land acquisition. 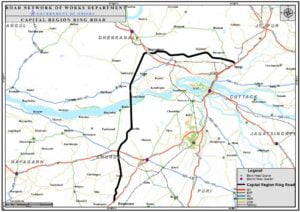 Besides providing impetus to socio-economic growth in the capital region, it is expected to boost the commercial activities in the adjoining areas.

The Odisha government has decided to provide more than Rs 600 crore from the State Budget towards cost of land acquisition. The project is expected to be completed in 30 months.