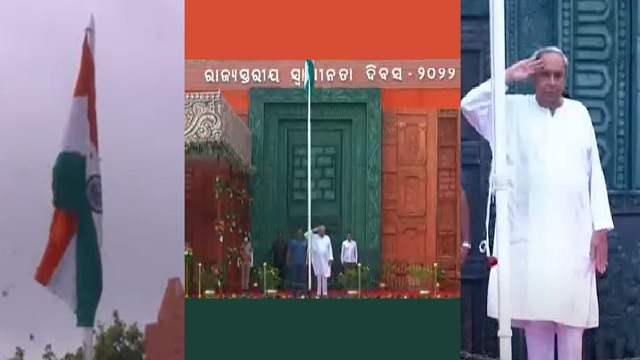 Bhubaneswar: Greeting the people of Odisha on the occasion of Independence Day, Chief Minister Naveen Patnaik on Monday said it was a proud moment for all Odias and the state, which had achieved many milestones in the last 75 years, showing the way to the country.

Addressing the people of Odisha after hoisting the Tricolour at the Independence Day function at IDCO Exhibition Ground in Bhubaneswar, Naveen paid tributes to freedom fighters, martyrs and COVID-19 warriors on the occasion. “Our Independence was the victory of every Indian. The victory of truth and non-violence. This victory has shown the way to the whole world,” he said.

“The country has achieved many milestones in the last 75 years. Today, India can compete with leading countries in various fields like agriculture, education, health, science & technology, industry and research,” the CM said.

“Odisha has also kept pace with the country’s progress. In 75 years, Odisha has shown the way to the country by achieving many landmarks,” he added.

“A new era of transformation has started in Odisha today. Odisha’s success is paving the way for others. From a food-deficit state, we are now food surplus. The state has set an example in disaster management. It’s now a sports hub and around 70 lakh women have been empowered through SHGs in Odisha,” Naveen said.

“Education is our focus. Our schools are undergoing transformation. It has created new hope in children. Odisha’s ‘Adarsha Vidyalayas’, started for talented village children, have become very popular today. From Kotia to the iconic OAV in Bhubaneswar, one lakh children are studying in 315 exemplary schools today. Fifty hostels have been arranged for 5,000 girls in these schools,” he added.

The CM informed that on the occasion of 75 years of India’s Independence, the state government will lay 3,000 foundation stones for various infrastructure projects in rural areas in 30 districts.

He also spoke about the state government’s special emphasis on employment for Odia youths. “Regular recruitment is going on to fill vacant posts in the government sector. Steps are being taken to fill more than 70,000 entry-level posts in various departments,” he said.

“Odisha has done very well in empowering tribals. Tribal children of the state are today gaining fame in various fields, in the country and abroad. I was very happy to meet Sesha Kisan, an Odia, in Rome recently,” Naveen said.

He said that after food security, nutrition security was the focus of the state government. The ‘Millet Mission’ has been extended to 29 districts and Rs 2,800 crore will be spent on it, he added.

“Odisha is the holy land of Lord Jagannath. Odias have always risen above regional mindset and worked in the national spirit. Odisha sponsoring both the men and women Indian national hockey teams is the best example of our nationalistic spirit. And after 25 years we will celebrate the centenary year of Independence. That’s why we have to prepare from now,” the CM said.

A total of 15 platoons of police force were deployed as part of security arrangements.