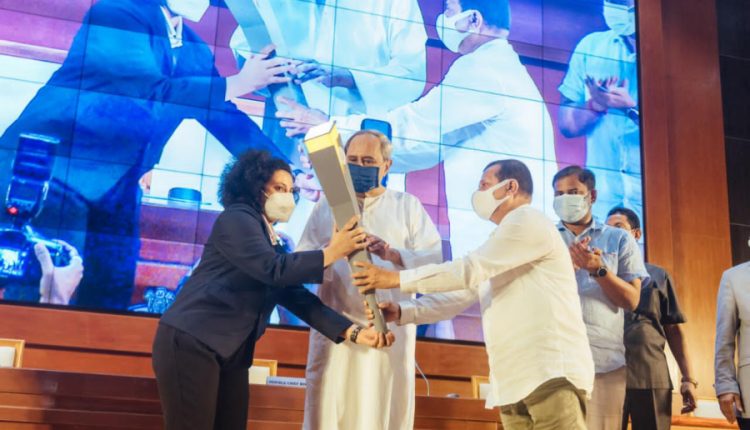 Bhubaneswar: Chief Minister Naveen Patnaik handed the first-ever Relay Torch for Chess Olympiad over to Padmini Rout at a function at the Convention Centre of Loka Seva Bhawan in Odisha capital on Friday.

The Relay Torch had arrived at Biju Patnaik International Airport this morning.

WGM Kiran Manisha Mohanty brought the relay torch to Loka Seva Bhawan and handed it over to the Chief Patron of AOCA Dr Achyuta Samanta. The Chief Minister received the torch from Dr Samanta. Both Kiran and Padmini are celebrated international chess players from Odisha. As many as six players from Odisha, including Padmini, will participate in Chess Olympiad to be held in Chennai.

The Torch relay will be taken to heritage sites in Puri and Konark.

Speaking on the occasion, the CM said that Chess originated in India and was known as Chaturangit. “And it was a proud moment for India to be hosting an international sports event like the Chess Olympiad on its 75th year of independence,” he said.

Naveen further said that Odisha has been producing good results in Chess. “Some of our players have done exceedingly well at national and international events. We also organized the World Junior Chess championship in 2016. We intend to further strengthen the game across the state, especially in schools. We will conduct competitions at school and college levels regularly and promote the game in a professional manner,” he said.

This mega event will further promote the game and create future champions, he added.

He wished good luck to the Indian contingent which is taking part in this Olympiad and hoped for their victory.

The Olympic Relay Torch was received by Prime Minister Narendra Modi in New Delhi on June 19 and he has handed it over to Grand Master Viswanathan Anand. The Relay Torch will be carried to 75 iconic places in India.