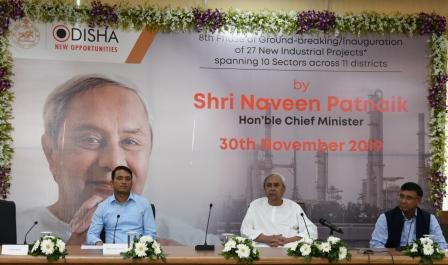 Of the 27 projects, the Chief Minister inaugurated five projects and laid the foundation stones of 22.

The projects having a projected cost of Rs.8938.81 crore will create employment opportunity for about 12,142 people. Speaking on the occasion, the Chief Minister said Odisha has a vision of becoming one of the top three investment destinations in the country in terms of grounded investments.

Stating that Odisha has emerged as the number one state and the most attractive destination for investments during the period April to September 2019 receiving 18 per cent investment of the entire country, he said the focus should be on the quick grounding of these industrial projects.

He further said that the state government, which has devised 5 Ts strategy to achieve transformation at all levels through teamwork, transparency and technology in a time-bound manner, is already witnessing encouraging results towards industrial development of the state.

The Chief Minister invited the global business community to join the state government at the Make in Odisha Conclave 2020, to make it the greatest investment summit ever organised by any state in the country.

On the occasion, the Chief Minister launched a new website for the Odisha Film Development Corporation (OFDC) and the 365-day countdown to Make in Odisha Conclave 2020 in the presence of the Industries Minister Dibya Shankar Mishra, Chief Secretary Asit Tripathy and senior officials.