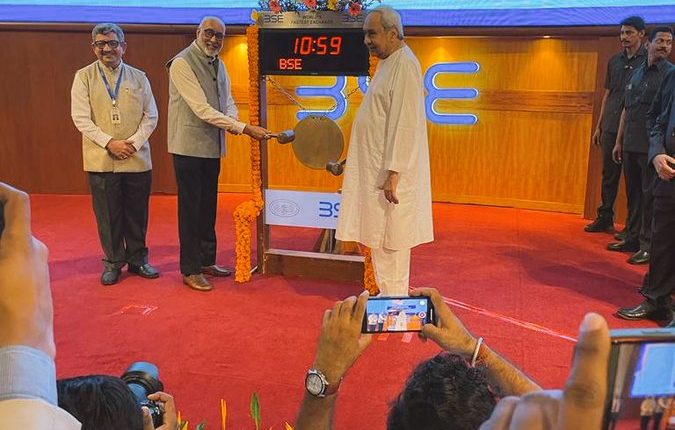 Mumbai/Bhubaneswar: Before flying back to Bhubaneswar after his three-day Mumbai visit, Chief Minister Naveen Patnaik rang the opening bell of Bombay Stock Exchange (BSE) around 11 am on Thursday.

The opening bell marks the beginning of the trading day at the stock exchange.

“I was happy to be at this historic institution today and it was the most interesting experience,” he told the media.

Naveen reached Mumbai on Tuesday evening and had one-one interaction with India’s top business honchos, including Kumar Mangalam Birla, Anil Agarwal, Anand Mahindra, whom he invited to explore vast opportunities for investment in the state, the following day ahead of the curtain raiser event for the third edition of Make-in-Odisha Conclave 200 in Bhubaneswar later this year.

“Odisha is one of the fastest growing economies in India and has consistently grown above the national average in the last decade-and-a-half. We are fast emerging as a major industrial destination in eastern India because of our natural resources and strategic location,” Naveen told in his address to business leaders, top executives and bankers during the Odisha Investors’ Meet, which was attended by over 300 delegates.

One Of My Nude Photographs Was Morphed, Claims Actor Ranveer Singh