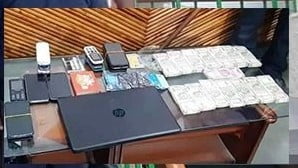 The arrested persons have been identified as Akash Kumar (21), Subham Priyadarshi (19) and Kousheldra Kumar (23).

According to sources, Om Prakash Mishra (37) of Bhuban of Dhenkanal district had lodged a complaint alleging that three cyber fraudsters had duped him of Rs 40, 45,000 by creating of a fake website (reliancepetroleum.org) and tempting him to deposit money in different fraud bank accounts for getting the dealership of a Reliance Petrol Pump.

Based on the complaint, CB CID started investigation into the matter.

The accused persons were produced before the JMFC Court, Patna for transit remand for production before the Court of JMFC Bhuban by December 2.

They are being forwarded to the JMFC Court, Bhuban.

Cyber Criminals On The Prowl In Bhubaneswar, Loot Over Rs…