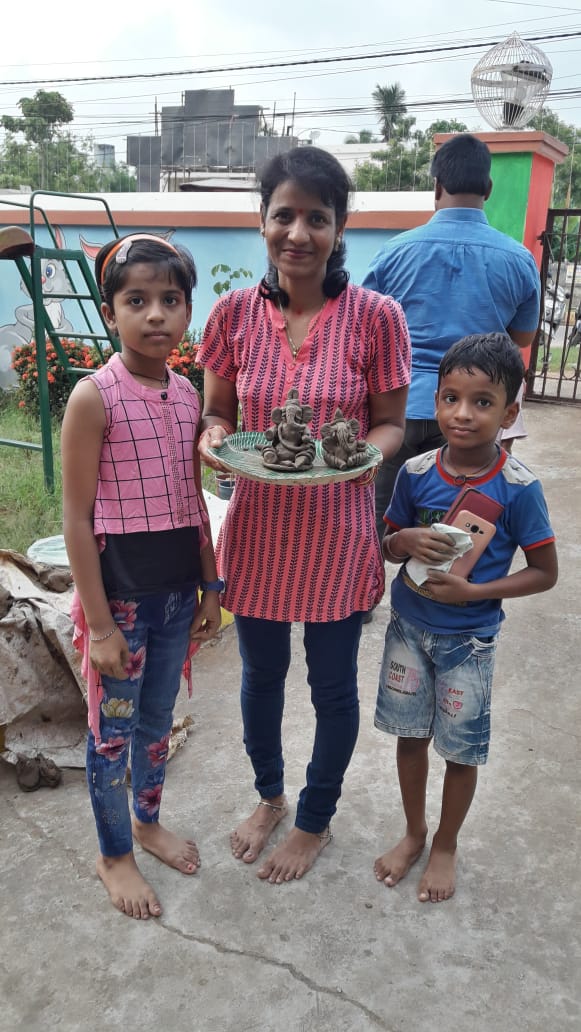 Bhubaneswar: Taking into consideration the environmental concerns, denizens have been for opting for eco-friendly Ganesh idols and this year is no different. Here’s a look at a few such initiatives in Odisha capital:

Ahead of the festivities, a unique Ganesh Tree workshop was organised in the city on Saturday.

The enthusiastic participants made their own Ganesha idol with non-chemical based eco-friendly red soil under the guidance of  sculptor Minaketan, informed school founder Monalisha Mohapatra.

A live seed pre-embedded inside handmade Ganesh idols were presented to all the participants for Ganesha Chathurthi at their respective homes on Monday.

Instead of the conventional practice of immersing the Ganesh idols in water bodies during  ‘Visarjan’, which leads to water pollution, the participants were advised to bury these in their gardens.

“The seeds in these Idols would then sprout into saplings and with a little care would grow into trees,” the school founder said.

This innovative workshop was organised to spread awareness about importance of environmental conservation among the children, she added.

“Cyclone Fani caused irreparable loss to the green cover of the state. All participants were also given tree saplings to promote re-plantation,” she informed.

IPS ADG and Chairman OPHWC Lalit Das graced the occasion and extended his support for the cause.

For the safety of the environment, two sisters, Reeta Baliarsingh and Shanta Baliarsingh, have made a Ganesh idol from chocolate.

“The colours used in the idols pollute the environment. We did not want to use any chemicals while making an idol. Then the idea of creating one with chocolate came to our mind,” said Shanta.

“After the puja, we do the ‘Visarjan’ in milk. Then we will distribute the chocolate-mixed milk among the children of a nearby slum,” she added.

Notably, the sisters run a school for special children ‘Wood Apple’. They also own a chocolate factory with the help of which they have made this 1.5 ft Ganesh idol.

He has created a ‘Medha’ with discarded plastic bottles, cups and use-and-throw pens.

Through his creation, he wants to give out a message on how plastic can be reused.

He has also made different clay idols of Ganesh playing traditional instruments. Through this, Rao urges people to celebrate the festival without playing loud music.