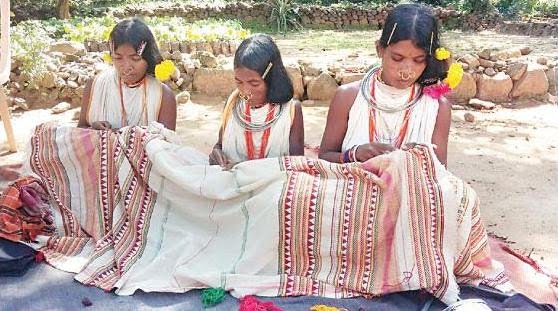 Bhubaneswar: Kapdaganda shawl, unique to Dongria Kondh tribe, is finally in the queue for joining the list of ethnic products and produces from Odisha protected under the Geographical Indications (GI) tag.

Niyamgiri Dongria Kandha Weavers Association and Directorate of Scheduled Castes and Scheduled Tribes Research and Training Institute (SCSTRTI) have jointly filed an application, seeking the tag from the GI registrar to protect the misuse of this handloom product by mass production.

There is a huge demand for this ethnic embroidered shawl of Dongria Kondhs, a particularly vulnerable tribal group (PVTG) who live in the Niyamgiri Hills of Rayagada and Kalahandi districts, among domestic and international tourists for its geometric patterns.

The hand-woven motifs are mostly different types of lines and triangular shapes that reflect the importance of mountains for the community. These are embroidered, using red, green and yellow threads, on an off-white coarse cloth, which they procure from the Domb, a local schedule caste community, by bartering harvested crops.

Each colour is liked to their socio-cultural values:

Green: Fertile mountains and hills denoting prosperity and development of their community.

Red: It is the symbol of blood, energy, power and revenge

The triangular shape of mountains recurs in the designs painted on the walls of the village shrine as well as in the colourful Kapdagunda that they wear.

The shawl is gifted by the young to the elders of the community as a mark of respect.

Though there is no historical evidence on the origin of Kapdaganda, it is a part of their rich heritage of cultural and ethnic identity, said the applicants.

They wore these shawls during their visit to the Jeypore King’s court while delivering vegetables, fruits and other things collected from the forest. This practice among the Dongrias began in the mid-17th century during the reign of King Vikram Dev, they added.

However, the past few years have seen rampant duplication of this product by some designers while private sector handloom firms have gone for its mass production.

Last year, the tribal leaders of the community in Rayagada had lodged complaints against 40 organisations and individuals for selling ‘fake’ Kapdaganda shawls on e-commerce sites and replicating the designs on shoes and bags.

“A GI tag will provide the tribal weavers legal help in preventing duplication of their traditional designs,” president of the Niyamgiri Dongria Kandha Weavers Association Sindhe Wadaka was quoted as saying by TNIE.

Notably, both Kalahandi and Rayagada administrations have been pressing for the GI stage to the Dongaria Shawl since 2018.