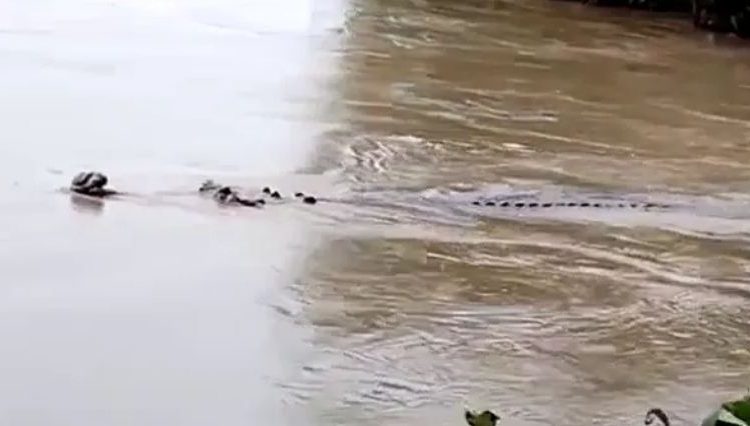 Bhubaneswar: Panic gripped some areas in Odisha’s Jagatsinghpur and Jajpur districts after crocodiles were spotted in floodwater, which has inundated several villages.

In Jagatsinghpur district, a crocodile was sighted in the floodwater of Paika river near Kathakote in Kujang area on Wednesday, triggering fear among residents of nearby villages who are stranded due to the inundation of vast areas.

With the high inflow of water from the Mahanadi, Paika river is overflowing near Kathakote area. Gushing water marooned several villages following a breach in the embankment.

The residents of villages in the area are in a state of panic after a video of the reptile floating in the floodwater went viral on social media. They feared that the crocodile may enter the village and harm them. Those stranded in the floodwater sought immediate steps for their evacuation

Meanwhile, forest department officials are taking necessary steps to send the crocodile from the place to ensure that it goes into to the deep water of the river, sources said.

A similar report was received from Jajpur district where crocodile fear gripped after two big reptiles were spotted in Dasarathpur block. Some residents of Dharampur village spotted two huge crocodiles in the swollen river.

The villagers said the crocodiles perhaps reached the river bank due to the flood. They demanded immediate steps to capture the reptile.