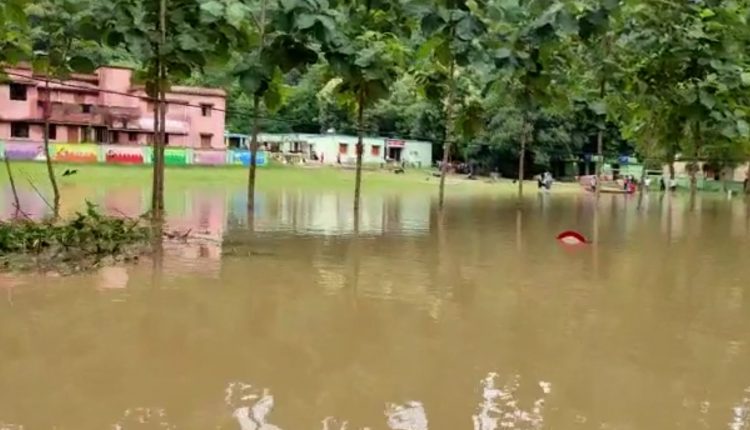 Balasore: As Odisha combats a high-intensity flood in Subarnarekha river, Balasore on Monday turned out to be the worst hit with floodwaters inundating many villages, leaving hundreds of people marooned and snapping road connectivity in several parts of the district.

A large number of villages were severely affected in the four blocks Baliapal, Bhograi, Basta and Jaleswar in the coastal district as the swollen Subarnarekha continued to flow above the danger mark, worsening the plight of people in these flood-struck areas, sources said.

The Balasore administration has made arrangements for evacuating over 1.2 lakh people as the peak flood water of the Subarnarekha was likely to pass through Rajghat on Monday. “Evacuation of people is going on in full swing. Senior officers are coordinating the operation in the field,” a senior official said.

However, the residents in many villages in Baliapal, Jaleswar and Bhograi blocks claimed that they found little time to shift to safe places, while officers from the administration were yet to reach several areas.

A report from Baliapal said the flood situation in villages in the block has turned grim, marooning over 40,000 people in the area. Residents of at least 45 villages of 12 panchayats in the block have been submerged by floodwaters.

“Even schools, Anganwadi centres and other structures in the area that were meant for sheltering people being shifted from vulnerable locations have become unsuitable for accommodating them as they are under knee-deep water,” said a villager of Rasulpur in Bhograi block.

As the high school building in the village was submerged with water, teachers were compelled to distribute 10th class certificates to the students from a safe place on the road nearby.

“The students who have passed Class X examination need their certificates to get admission in colleges. As floodwaters are flowing inside the school building, we are handing over the certificates to the students and their guardians from the road,” said a teacher.

“We are grateful to the teachers as they are helping us in a big way despite the adverse situation,” said a girl student, who went to collect her certificate wading through waist-deep water on the village road.

A woman from Kalikapur under Baiganbadia panchayat of Jaleswar block said the situation has deprived them of relief assistance as the entire area is surrounded by floodwaters.

“We are unable to cook for the last two days all our belongings and kitchen utensils are under the water. There is no food and no one from the administration has come so far,” she said.

Floodwater was flowing four feet above Baliapal-Kamarda road snapping road connectivity between the two areas. As a result, villagers were forced to take a pregnant to hospital in a country boat, said a resident of Kalikapur.

Meanwhile, the water level in Subarnarekha near Rajghat has come down to 11.88m from 11.90m at 9 am. The river, however, is still flowing above danger mark near Rajghat and Jamsolaghat.

Subarnarekha river was flowing at 11.90 metres at Rajghat against the danger level of 10.36 meters, posing a serious threat to people in many parts of Balasore sources said.

In view of the flood situation, the Balasore district administration has declared that schools, colleges and Anganwadi centres under Basta, Baliapal, Bhogarai and Jaleswar blocks will remain shut for an indefinite period. While classes in all the educational institutions in these areas will be suspended in view of the safety and security of the children, teachers and other staff will attend school to address the exigencies.

Steps have been taken to involve functionaries of the Panchayati Raj institutions, women self-help groups and others concerned in evacuating people, said an official.

The water level in the rivers in north Odisha continued to rise following heavy rains triggered by a deep depression over the Bay of Bengal, and subsequent flood water release from Jharkhand. Nearly six lakh cusec of water were discharged from Galudih barrage on the Subarnarekha river in Jharkhand following heavy downpour, compounding the woes of people in north Odisha.

Officials said as many as 58 rescue teams comprising personnel of the NDRF, ODRAF and Fire Service were deployed in Balasore and Mayurbahnj districts.