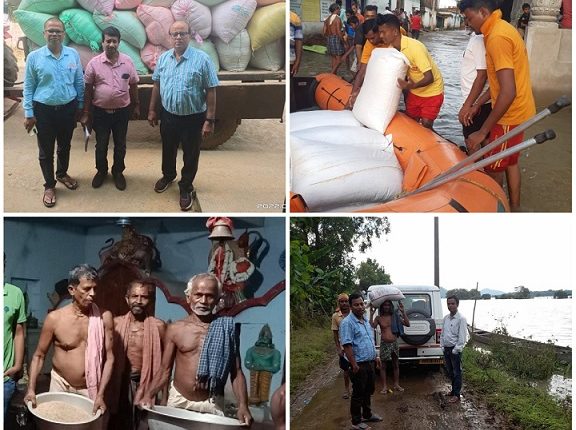 Bhubaneswar: With 12 districts of the state in the grip of floods and the MeT office warning of a fresh low-pressure area over the Bay of Bengal on Friday, the Odisha government has said relief and rehabilitation efforts were under way on a war-footing in the affected areas.

The government has set up free kitchens for the evacuated people. Drinking water pouches are being provided. Adequate stock of polythene sheets has been mobilised to shelter people. Besides, administrations of the affected districts are providing cattle feed for livestock evacuated from submerged areas.

“We are running free kitchens for a population of 60,000 in the flood-affected areas,” Special Relief Commissioner (SRC) Pradeep Kumar Jena was quoted as saying in a news report.

The government has also decided to use school buildings as shelters if required. It has written to all District Project Coordinators, DEOs and BEOs in this regard.

“All school buildings of the School & Mass Education Department of affected districts should be made available as per requirement of the district administration in case of exigency. The headmaster of schools may allow using MDM foodgrains, if necessary, by the district administration which will be recouped from the SRC and may also allow the school buildings for the purpose of shelter and relief distribution as per requirement,” the letter states.

Eighteen ODRAF and NDRF teams and 44 Fire Service teams are engaged in rescue operations round the clock.

The leaves of all government officials in Cuttack, Puri, Jagatsinghpur, Kendrapada, Nayagarh, Khurda, Angul, Boudh, Sonepur and Sambalpur districts have been cancelled for the next seven days.

Twelve districts of Odisha have been affected by the floods, as per preliminary assessment of the state government. The districts are Angul, Bargarh, Boudh, Cuttack, Jagatsinghpur, Jajpur, Kendrapada, Khurda, Nayagarh, Puri, Sambalpur and Subarnapur.