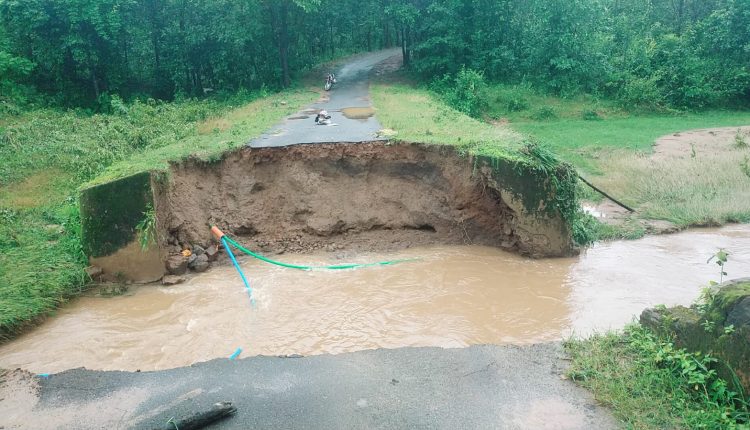 Phulbani: As normal life was thrown out of gear in many parts of Odisha due to flood situation and heavy downpour, road connectivity was snapped in some areas of Kandhamal district on Saturday after at least three bridges got swept away by gushing water.

Following incessant rain triggered by back-to-back low pressure areas in the region, water from several swollen rivers and rivulets including Khagda, Raul and Damdeinala inundated many places in Baliguda area of the district, sources said.

A bridge at Butedimunda on the road connecting Kurtamgarh and Sirla in Tumudibandh block was swept away by the gushing water, severely affecting vehicular movement on the route.

Similarly, as the water level of Raul river near Jalespata rose menacingly, a bridge connecting Betabadi and Jalespata was swept away, disrupting vehicular movement and causing inconvenience to commuters.

A large number of vehicles were stranded at several places as flood water was flowing over the roads.

A report from Daringbadi said another bridge collapsed at Samanbadi near Tilori, snapping connectivity between Daringbadi and Budaguda and leaving many vehicles stranded.