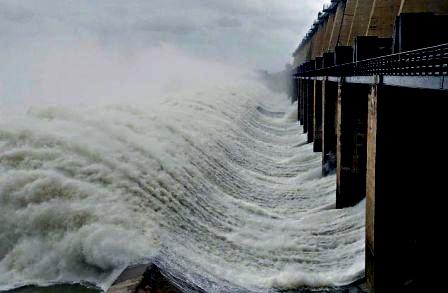 Bhubaneswar: The overall flood situation in Odisha has improved with a gradual fall in the water levels of major rivers.

The water level of Mahanadi has started receding due to lesser flow of floodwaters from the upper catchments due to scanty rainfall in Chhattisgarh in the past 48 hours.

Due to the lesser inflow of floodwaters, the dam authorities have closed four more gates. At present, the inflow of the water into the dam is 4,37,643 cusecs per second while the outflow from 28 gates is 5,13,881 cusecs per second.

At the same time, the discharge of floodwaters at Khairmal, Barmul and Mundali has also receded.

The discharge of the floodwater at Khairmal, which was 7.10 lakh cusecs at 6 am on Tuesday, is now 6.94 lakh cusecs per second.

Barring the water level of Mahanadi, which is flowing at a height of 26.92 metres against the danger mark of 26.41 meters, the water levels of Devi, Kushabhadra, Ib, Brahmani, Baitarani, Budhabalanga, Subarnarekha, Vanshadhara, Rushikulya and Jalaka are flowing below the danger level.