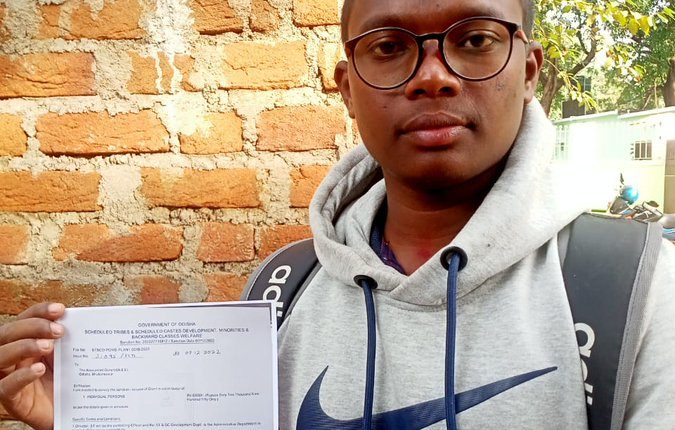 Bhubaneswar: Amid reports about Ifu Mallick working in farmland and construction sites to fund his medical education, the Odisha government on  Tuesday sanctioned Rs 62,950 towards expenses for his 1st-year MBBS course at Saheed Lakshman Nayak (SLN) Medical College and Hospital in Koraput district.

“As reported on a media platform Ifu Mallick was unable to arrange for admission fees and other expenses. This came to the notice of Chief Minister  Naveen Patnaik who directed the ST/SC Department to address the issue on a priority basis,” an official tweet said.

It further said that the funds were released under the financial assistance for ST students scheme of the state government. This initiative was started to help meritorious ST students pursue their studies, especially in professional colleges.

“5T Secretary VK Pandian also spoke to him and invited him to meet the CM when he is in Bhubaneswar,” the tweet further noted, adding that the government bears the cost of studies and accommodation of SC and ST students getting into national institutes on merit.

Ifu is a son of a daily wager from Bagramila village in the tribal-dominated Kandhamal district, He cracked NEET on the second attempt. But to realise his dream and pay the annual hostel fees of Rs 15,000, he had to work as a farmhand and at construction sites. He had borrowed Rs 38,950 from his friend’s father to deposit the first-year admission fees at the government-run medical college. Besides the hostel fee, he also needed Rs 4,000 to pay the monthly mess charges and was struggling to arrange the money with December 15 as the deadline when classes are to start.