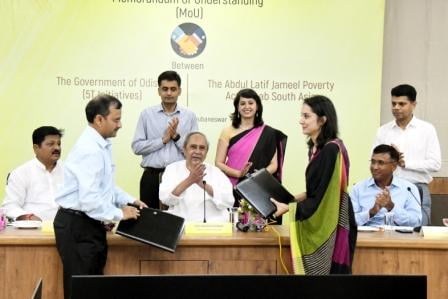 It was co-founded by Nobel laureates Abhijit Banerjee and Esther Duflo for targeted intervention in a set of social sectors, including the poorest of the poor, through policy formulation and evaluations based on experimental research.

The MoU was signed by the Development Commissioner Suresh Mohapatra and Executive Director of J-PAL South Asia, Shobhini Mukerji in the presence of Chief Minister Naveen Patnaik and senior government officials at Kharavela Bhawan here.

As per the MoU, J-PAL will work in at least eight districts including the undivided KBK (Kalahandi-Balangir-Koraput) region for the improvement of the poorest of the poor, women and nutrition.

J-PAL will take large variables from these districts and match them with those in the existing research models. It will devise the evaluation and policy formulations accordingly. The organisation is known for conducting a comprehensive house-to-house survey to chalk out its research models.

Besides, J-PAL South Asia and the state government will have an annual policy dialogue. The subjects covered will be malnutrition, women’s empowerment, distress migration, health-worker performance, and improving agricultural productivity to identify the top policy priorities to share evidence for innovative solutions that can be field-tested through rigorous and random evaluations.

“Chief Minister Naveen Patnaik has been focusing on the transformation of Odisha through the timely application of transparency, teamwork and technology. This programme partnership has all the components of 5Ts (Transparency, Teamwork, Technology, Time and Transformation) with the on-field application,” said a release issued by the Chief Minister’s Office (CMO).

Inaguration Of 2nd Police Station At Chandrashekherpur In Bhubaneswar