Odisha Hockey Men’s World Cup Off To A Flying Start 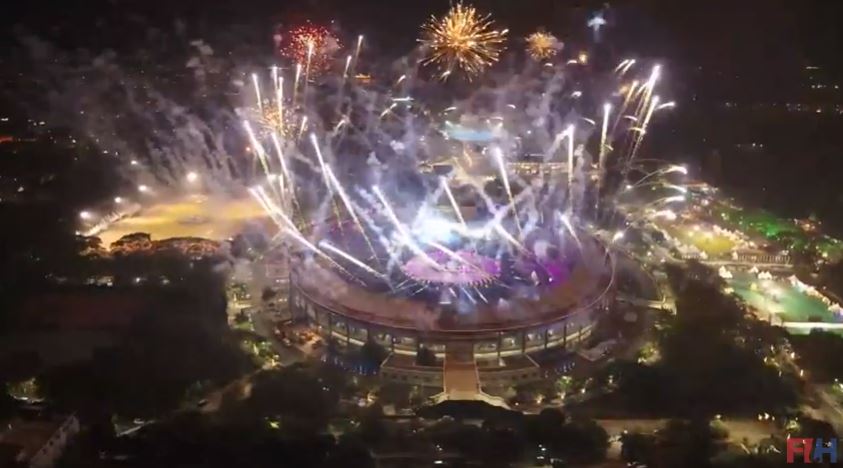 Bhubaneswar: The much-awaited grand opening of the 14th edition of Hockey Men’s World Cup kicked off in style at Kalinga Stadium here on Tuesday evening.

The spectators in the jam-packed stadium enjoyed the grand celebrations with the scintillating performance by the Bollywood dancing queen Madhuri Dixit, Oscar and Grammy awardee and eminent Bollywood music director AR Rahman and above all, the address by the Bollywood superstar Shah Rukh Khan.

Welcoming the international hockey teams participating in the mega event, the distinguished guests and the Hockey India officials, Chief Minister Naveen Patnaik said they are the guests of the 45 millions of people of Odisha who are known for their warmth and hospitality.

“All of us are looking forward to this 18-day hockey festival. Again I thank all of you for coming here. I now declare the Odisha Men’s Hockey World Cup Open,” the Chief Minister announced.

In his welcome address, president of the International Hockey Federation (FIH) Narinder Batra said it is truly a moment of history.

“It is my honour to represent the International Hockey Federation at this platform. We had been waiting for this day to kick-start the 14th Odisha Men’s Hockey World Cup which was awarded to India way back in 2013,” he added.

The FIH president also spoke highly of the people of Odisha.

“No dream is too big to achieve as we stand testimony to it right now. Now I can say that for the people of Odisha no task is impossible for them as the manner in which they have transformed the Kalinga Stadium to make it as one of the three finest hockey stadiums in the world,” he noted.

Stating that the manner in which the inaugural celebrations of the Men’s Hockey World Cup organised here tonight is the first of its kind in the history of the Hockey World Cup, Batra thanked the initiative of the Chief Minister Naveen Patnaik who led from the front, the state Sports and Youth Affairs department and the line departments, members of the Hockey India and the enthusiastic sports lovers of Odisha as they have set a standard on how the next Hockey World Cup would be organised.

Lavishing praise on the Odisha government for its penchant for sports, the FIH president said that Bhubaneswar is now going to be recognised as the sports capital of India.

“The city of Bhubaneswar and all of you present here today have been the driving force for us to be able to bring this pinnacle hockey tournament here. Your love and passion for hockey is the reason for which we all are here today. We are truly grateful to have such fantastic support here,” Batra said amid the thunderous applause of the spectators.

Praising the people of Odisha for their innate passion for hockey, Shah Rukh said, “I am very proud to be here today and even more so because my father was a hockey player who taught me how to play hockey when I was only eight-years-old. By the time I was 18, I had captained my class team and my school team in hockey and by the time I was 38, I pretended and acted as if I was the coach of the Indian national hockey team in the movie Chak De India. For me, there is no special game than field hockey and what it sets it apart is that it is an amalgamation of a lot of emotions, thoughts and action.”

“I am so happy and so grateful to see Odisha take this route and show the way to the rest of the world under the able leadership of Mr Naveen Patnaik,” complemented the Bollywood actor.