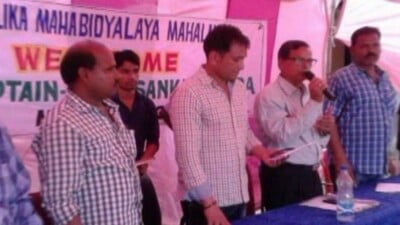 Bhawanipatna: The demand for the resignation of Minister of State for Home Captain Dibya Shankar Mishra over the kidnapping & murder of schoolteacher Mamita Meher has grown shriller with opposition BJP and Congress scaling up the protests in Bhubaneswar, Kalahandi and Balangir on Tuesday.

The prime suspect, Govind Sahu, is alleged to have shared close proximity with the minister. And the parties are pushing for his removal from the post to ensure fair investigation in the case.

Meanwhile, more skeletons linking Sahu to the ruling BJD are tumbling out of his closet. If media reports are to be believed he handled ‘Mo School’ projects in Kalahandi.

A contractor by profession, he was not only the managing committee president of Sunshine English Medium School but also the president of Mahalinga High School Alumni Association and was supervising works – construction of boundary wall, new building, school gate, smart classroom and playgrounds- being taken up under the programme in the institute.

The school had collected Rs 57,588 lakh through the contribution of the alumni and was assured of a grant of Rs 1.01 crore from the Odisha government under ‘Mo School’ Abhiyan. The school had also received Rs 45 lakh under the 5T’s transformation of the high school programme. reportedly, Rs 74 lakh was withdrawn for the projects in two instalments of Rs 37 lakh each.

Sahu was also the founding member of a private unaided college – Anchalika Mahavidyalaya. The school and college are located within the same campus. The school was et up in 2015-16 and the college in 2010, which he started with funds from Western Odisha Development Council (WODC), MPLAD and MLA LAD besides private donations, a TNIE report said. ‘

The government had, however, rejected the grant-in-aid proposal of the college which the committee had filed in 2015.

Meanwhile, Sahu has been removed from the committee following his arrest.