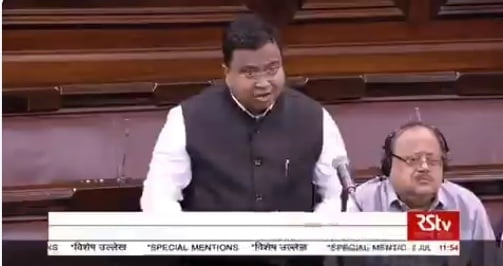 Taking to Twitter, the BJD MP expressed gratitude to Naidu for appreciating his first submission in the Rajya Sabha.

I express my deep gratitude to Hon’ble Chairman, Rajya Sabha Shri. M.Venkaiah Naidu ji for his kind & warm appreciation at the end of my first submission in Rajya Sabha today, terming it as “good, best submission.” I am extremely grateful @MVenkaiahNaidu Sir for your kindness. pic.twitter.com/Jz7dgHeq1u

The submission was on the lines of the BJD government’s efforts to push for 33 per cent reservation for women in legislative Assemblies and Parliament. In November last year, Odisha Chief Minister Naveen Patnaik had moved a resolution in this regard in the Assembly.

The BJD MP said that delegations have been sent to about 22 political parties to garner support for passing the Bill.

The BJD had fielded 7 women candidates in 21 Lok Sabha seats and five of them emerged victorious.

Stating that the Bill not being brought forth is another lost opportunity, Patra requested the Union government to take immediate steps in this regard.