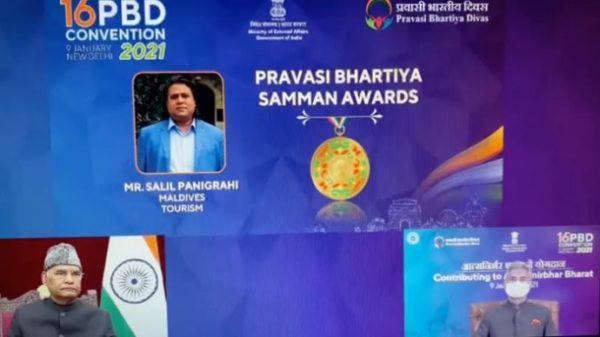 New Delhi: A native of Odisha and founder Managing Director of Atmosphere Hotels & Resorts Salil Panigrahi was recognised with the Pravasi Bharatiya Samman in the field of tourism.

Prime Minister Narendra Modi inaugurated the Convention which was held virtually on Saturday.

Salil was among the 30 NRIs, and Indian-origin people and organisations, who received the highest honour conferred on overseas Indians.

A Chartered Accountant from Bhubaneswar, Salil started his career about 25 years back at Oberoi Hotels & Resorts in the finance department.

Salil has worked with Six Senses Group before heading to Maldives where he and partners set up EoN Resorts. He was man behind launch of resorts like OZEN Reserve Bolifushi, Constance Halaveli, Six Senses Laamu, and other luxury holiday stay facilities.

This success led him to start Atmosphere Hotels & Resorts. Its first property, Atmosphere Kanifushi, started in 2013. The other properties of the group are OBLU at Helengeli; OZEN Life Maadhoo; OBLU Select at Sangeli  and VARU.

You Can’t Afford To Miss This Celestial Spectacle Today Evening