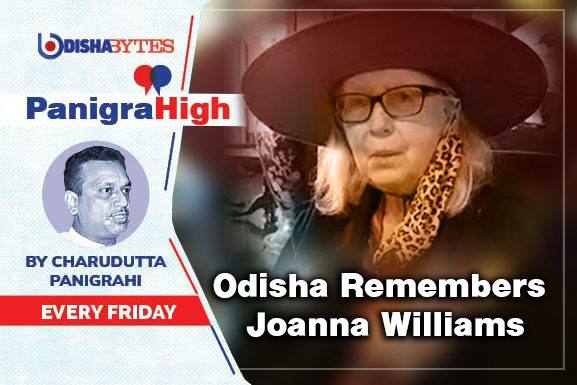 Joanna Gottfried Williams was her full name, and the art of South Asia was her first love. Visual art in all forms – folk art, textiles, paintings, palm leaf paintings. History of art so bewitched her that for her post-doc, she studied the wall paintings of Central Asian Khotan. Khotan was the capital of an important ancient kingdom called Yutian, which is present day Xinjiang province of China.

In her formative student days, she found a strong calling of the exotic – dwelling on the art manifestations of the political and economic powers of the state controlling major parts of the super way Silk Routes marrying West with Asia. History records that the Khotan settlement was started by King Ashoka’s son around 304 BCE (before the common era). It was started because the family was banished from India after the Buddhism adoption by Ashoka, post the gory war.

Joanna deep-dived into Buddhist frescos, Buddhist vestiges Mural Art, almost six decades ago. Normally the evidence surviving from the past is vast, fragmentary, and disjointed. The onus must have been on the steady and disciplined art historian in Joanna to run a thread connecting civilisations along the silk route and beyond but linked, including influences like Buddhism. She was not only an investigator but also an elucidator.

The entire region with India, Sri Lanka, Pakistan, Afghanistan, Nepal, and Southeast Asia, was almost raring to invite her to scratch the surface of art and its multitudes and plate them to the world of cognoscenti and honest scholars alike. For about four years she was posted in India as a Program Officer in Ford Foundation and her love affair with Odisha started.

Her “beloved Orissa” captivated her, and she wrote influential, analytical Palm Leaf Miniatures: The Art of Raghunath Prusty along with J.P. Das (1991) and Essays on Orissan Art, anthology of essays by nine authors. About eight years ago I remember Prof Hermann Kulke mentioning Essays & Joanna during our discussions on Odisha art forms. This morning Sri J.P. Das informed me about the demise of Joanna on 16th July, with palpable grief on the loss of a long-standing associate with unimaginable love for Odisha’s art forms and their historical journey through regimes, influences and cultural impacts.

Her love for Odisha gave us seminal disquisitions. We rarely find such assiduity, in house. J.P.Das and Joanna go a long way since 1979, when they had met at Mumbai at the Homi Bhaba museum society. In 1982, JPD dedicated his Puri Paintings book to Joanna. Mutual admiration born out of Palm Leaf Painting – Patta chitra interest and research.

Joanna spent about four decades teaching History of Art at the University of California, Berkeley and established herself as an institution in History of Art. History is a product of the time and place it was written as of the evidence from the past that it interprets, Joanna probably had to juxtapose her field learnings with the ‘public history’.

She, knowingly or otherwise, through her work, helped bring esteem to the “Art from the rest of the world”, which labelled “non-Western art,” and was typically treated only marginally or emphatically from a colonialist perspective. Palm-leaf Miniatures: The Art of Raghunath Prusti of Orissa, is a rare compendium of a unique art form identified with Odisha. The brilliance of an art form etched from and with nature and embodying the innocuity of a lifestyle bereft of pomp and avarice.

In The Two-Headed Deer: Illustrations of the Ramayana in Orissa, she studies the familiar genres of visual art and their genesis from epics like Ramayana. The art forms are as diversified as illustrated manuscripts, drawings on palm leaf paper, wall paintings, shadow plays, temple sculpture, and painted cloth, and even sarees. She had gone deeper to include the rural theatre (jatra/nataka) and other forms of folk story telling like Pala/Daskathia in her related research.

Joanna helped build the Odisha art narrative much stronger and quite eloquently argued that the traditional art, was conventional or trite.

Her work has long impacted the anthropologists, folklorists, and scholars of literature over a large period of time, exceeding five decades. Joanna had authored many books, on India, including Art of India’s Mewar Kingdom.

I am aware that her work on Odisha has helped expand the traditional focus on painting, sculpture, and architecture. Arts such as ceramics and textiles and contemporary media such as video and performance art included. Her study of art forms has enhanced the use of art to tell stories in Odisha. Joanna has been instrumental in developing the realization and recognition that art is an important way for information to be recorded and preserved.

Odisha art intellectualism will miss her unseen and unobtrusive guidance.

Picasso said that “to draw, you must close your eyes and sing” – Joanna is with the palm leaf miniatures with her eyes closed.

(Charudutta Panigrahi is a thinker and an author. He may be reached at charu.panigrahi@gmail.com)