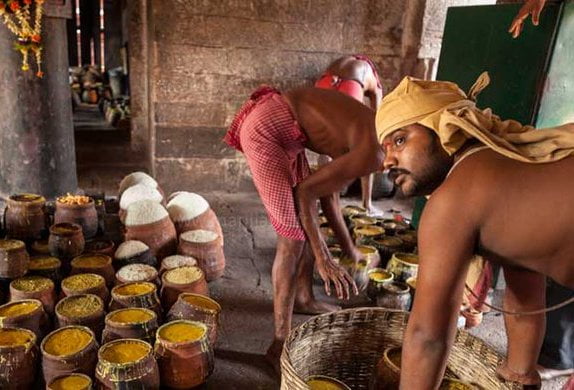 Puri: While the sale of mahaprasad from the Jagannath temple in Puri has been hit hard due to the weekend shutdown, the two-week statewide lockdown beginning on Wednesday will further worsen the situation.

The secretary of Suara Mahasuara Nijog, Krushna Chandra Pratihari, told the media on Tuesday that while the mahaprasad is prepared for around 40,000 devotees every day, it is now availed by only 200-300 devotees.

Pratihari said that with no devotee turning up for the mahaprasad on Saturday and Sunday due to the weekend shutdown, the sevayats had to bury it on the temple premises on Saturday and distributed them among slum dwellers on Sunday.

He informed that the temple administration is incurring a huge loss due to the poor sale of mahaprasad. Therefore, the Suara Mahasuara Nijog has decided to stop the preparation of the mahaprasad except for Kotha Bhoga and that ordered by devotees belonging to Puri town.

Pratihari also expressed resentment over the state government banning the sale of mahaprasad, While the government has allowed hotels and restaurants to provide takeaway food, why is it not allowing the same for the Jagannath temple sevayats, he asked.

The president of Suara Mahasuara Nijog, Narayan Mahapatra said they will take up the issue with the temple administration during a meeting with the Chhattisha Nijog on May 6.

“We will submit a memorandum to the state government through the Chief Administrator of the Shree Jagannath Temple Administration (SJTA) Krishan Kumar demanding relaxation in the sale of mahaprasad during the lockdown,” he added.