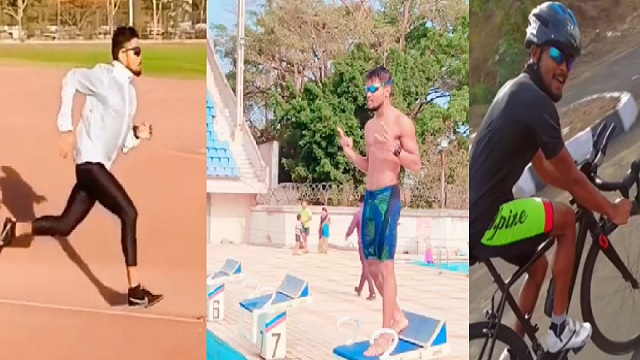 Bhubaneswar: Odisha triathlete Pranab Das has big dreams after finishing second in his maiden half marathon.

Triathlon tests an athlete in three disciplines — 1.5 km swimming, 40 km cycling and 10 km running. Half marathon is a different beast, so this result will help the 20-year-old push his limits as he seeks to become a great triathlete.

Ranked India No. 1 in triathlon, Pranab is pursuing his graduation in Jajpur, with Honours in Political Science.

The Jajpur-born triathlete, who has been out out of the sport for some time due too a knee injury, is eyeing a comeback in the National championship and preparing at the Mini Orange sports academy in Pune.

Besides triathlon, he has won 18 running competitions, six in cycling and two swimming events.

By the time he completed his Plus-II from Cuttack’s Jatiya Kabi Bira Kishor Das (JKBK) College in 2018, Pranab had realized his passion for sports and joined two sports hostels.

“I was inspired by Ironman of Triathlon Saubhagya Rath and contacted him. My family somehow managed to buy me a cycle worth Rs 30,000 to practise,” recalled Pranab.

He had no experience in swimming when he began pursuing triathlon. It was during the COVID-19 lockdown, when he went to his native place in Jajpur, that he took to a mini pond to swim. He then took the ‘plunge’ in Mahanadi river by watching swimming techniques on YouTube channels, and under Saubhagya’s guidance.

“The Cuttack Cyclists Association also helped me learn aero tricks to challenge the weather and cut through the wind,” Pranab told Odisha Bytes.

In 2020, he finished second in the junior category at a national-level running competition organized by Indian Triathlon Federation in Odisha’s Konark.

“I was informed about a company called Mini Orange which could sponsor me. After a few days, I received a call from one Anirban Mukherjee and was told that he wanted to sponsor me,” Pranab informed.

“I won the first gold medal for Odisha in triathlon in the championship held in Tamil Nadu’s Dhanushkodi in 2021,” Pranab said.

Pranab’s father lives in Chennai where he works in a  private company, while his mother, a housemaker, and his younger brother live in Jajpur.

Pranab’s dream is to improve and develop further in triathlon, and win laurels for Odisha and India.