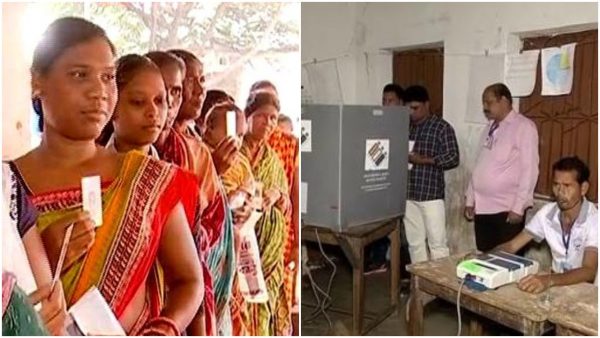 Bhubaneswar: Even as polling for election to urban local bodies (ULBs) has been by and large peaceful across the state so far, some candidates reportedly distributed money among the voters at the booths in three places.

According to sources, Independent candidate Debabrata Mohanty, contesting for councillor post from ward no-8 in Bhadrak Municipality, was found distributing money among the voters at a booth. Some voters opposed him and informed the police.

Police went to the spot and seized more than Rs 25,000 from possession of Debabrata. The candidate has been detained in the police station and further investigation is on.

Another case of money-for-votes has been reported from Patnagarh NAC in Balangir NAC. Pradip Meher, the brother of Patnagarh MLA Saroj Meher, was found distributing cash among voters at Ward Number 1,2 and 3 in Kolapada.

The BJP workers and locals caught hold of Pradip and thrashed him in presence of the MLA, the sources said. No complaint has been filed with police in this regard.

In the third incident, some people were found giving money to the voters at Government High School in ward no-5 of Baliguda NAC in Kandhamal district. A video in this regard has gone viral on social media. The people, who were distributing the money, are allegedly supporters of the BJD candidate for the councillor post of the NAC.

A man in Cuttack was also thrashed by the rival group for allegedly distributing cash to voters in Ward No-53. He was later handed over to police.

In Nayagrah district, the vice-chairman of Khandapada block, Sisir Kumar Sahu, was allegedly attacked by independent candidate Arati Pradhan’s husband and his associate in front of a booth at Khandapada Women’s College.

Locals staged a dharna outside three booths in Ward 14 & 15 of Jhankarpada in Sambalpur districts, demanding to stop the polling process, after two persons, including BJD councillor candidate, were injured during a clash between Congress and BJD workers over alleged booth rigging.

In another incident, a man, Ramesh Kumar Lenka, suffered critical injuries after he was allegedly stabbed in front of booth No-16 under Ward No-9 of Dhamnagar NAC in Bhadrak district following an altercation over casting of votes. Lenka, sustained deep wounds in the stomach and was rushed to Bhadrak Hospital for treatment. After preliminary treatment, he was shifted to SCB Medical College and Hospital, Cuttack. Angry locals staged protest by burning tyres and staged a road block.

Bhadrak Collector Trilochan Majhi said Lenka’s condition is stable. SP is at the spot and situation is under control, he added.