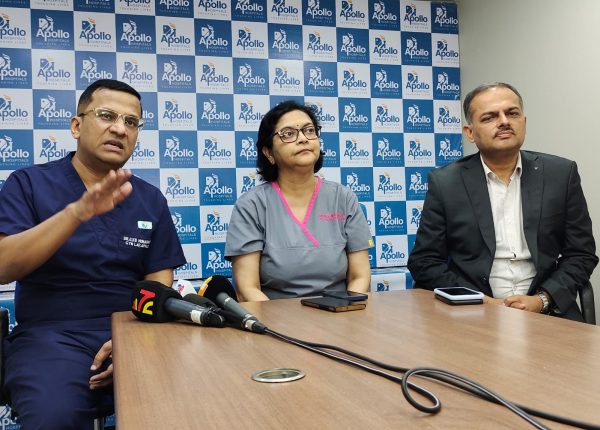 Bhubaneswar: A gynaecological surgery was conducted on Da Vinci robotic platform at Apollo Hospitals in Odisha capital. The hospital claimed it to be the state’s first ever gynaecological robotic surgery.

“With the advent of robotic surgery, it is another wonderful way of dealing with complex surgeries and taking it to the next level,” said Dr Mohapatra.

Since US FDA approved the da Vinci robot in 2005, it has been used in removing fibroids from the uterus (myomectomy), removal of whole uterus (hysterectomy), tubal re anastomosis (cases where patient wants opening up of the tubes after tubal ligation), complex surgeries like deep infiltrating endometriosis and radical surgeries done for cancers of the uterus, cervix, tubes and ovaries.

“As a surgeon, I firmly believe that it holds an edge over laparoscopy in complex procedures especially in advanced stages of endometriosis where we work in close proximity with urinary bladder, intestine and ureter where one wrong move can damage these vital structures and cause devastation in the form of severe morbidity and even mortality. Since the robot offers very precise movements and enhanced wrist movements it can be the procedure of choice also in surgeries done for cancers of uterine endometrium, cervix, ovaries and tubes which need greater tissue dissection and more precise hand movements”, said Dr Mohapatra.

Congratulating the surgeons and the team, Sudhir M Diggikar, Regional CEO of Central Region, Apollo Hospitals Enterprise Limited said, “I can foresee that in the times to come, robotic systems will be more commonly available at hospitals when patients will ask for treatment by robots.”

“This upgradation improves clinical outcomes with reduction in length of stay in hospital which will be great benefit for people undergoing surgery at the hospital,” said Dr Alok Srivastava, COO & Director Medical Services, Apollo Hospitals, Bhubaneswar.

Oral Sex In Car Leads To Head-On Collision With Truck!