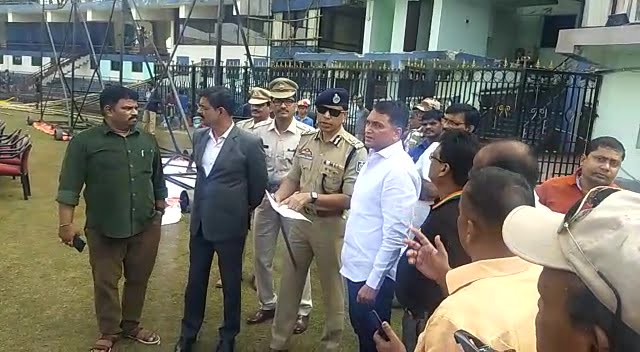 Cuttack: While preparations are in full swing in Barabati Stadium for the third day and night, one-day international match between India and West Indies scheduled on December 22, senior police officials and the Minister of State for Home Dibya Shankar Mishra visited the stadium on Saturday to oversee the overall arrangements and security measures.

Accompanied by the in-charge DGP Satyajit Mohanty, twin city Police Commissioner Sudhanshu Sarangi and Cuttack DCP Akhileswar Singh arrived at the stadium in the afternoon and had a discussion with the Secretary of the Odisha Cricket Association (OCA) Sanjay Behera.

“Efforts are on to host this international event in such a manner that the players after the match will say that Barabati is one of the best stadiums in the country and the spectators here are extremely sportive,” the minster told the media later.

The twin city police commissioner said since the police will not allow spectators to bring food, arrangements should be made inside the stadium to provide quality food to them at an affordable rate. Besides, there should be proper sanitisation of the bathrooms and toilets for the spectators with adequate supply of drinking water as they will stay for nearly 10 hours. “Besides, there will be a help desk in each gallery to help the spectators,” he added.

Stating that priority is being given on the sanitisation inside the stadium, the OCA secretary said that a fan zone will be set up at the upper Bali Jatra ground so that the people who are outside the stadium will be able to see the match on a big LCD screen.