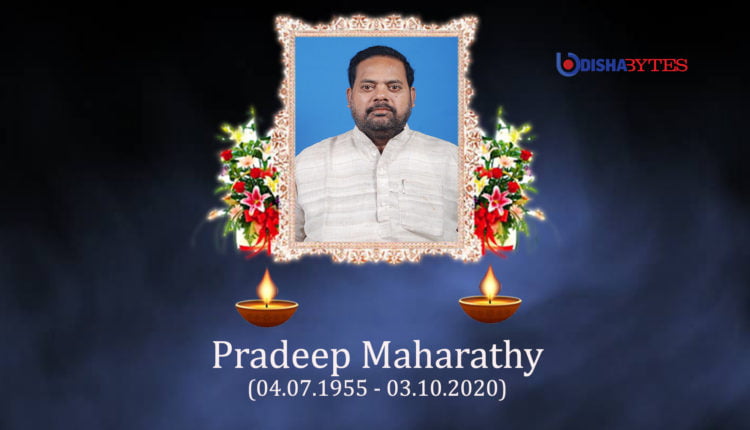 After testing positive for COVID-19 on September 14, Maharathy was admitted to the SUM Ultimate Medicare hospital. As his condition deteriorated, he was put on ventilator on Friday.

Earlier on the day, chief minister Naveen Patnaik spoke to the family members of the MLA and wished his speedy recovery. He also directed the doctors of the hospital to extend best possible medical services to Maharathy.

Political leaders cutting across the party lines have expressed their condolences to the bereaved family members of Maharathy.

The 65-year-old Maharathy started his political career as a student leader in SCS College, Puri. He was arrested under Maintenance of Internal Security Act (MISA) during Emergency in 1975. After release, he was elected as the president Of the students’ union in SCS College.

He contested the Assembly election for the first time from Pipili constituency in Puri district in 1985 as a Janata Dal (JD) candidate and was elected. He was re-elected from Pipili on JD ticket in subsequent election in 1990.

He was elected to Odisha Assembly for seven times from the same constituency. He won for five times as BJD candidate from 2000 to 2019 elections.

He was included in the Cabinet in 2011 and given the Ministry Of Agriculture. In 2017, Maharathy became minister of panchayati raj and drinking water. He also served as president of CARD Bank and Central Cooperative Bank.

Maharathy was the recipient of Global Agriculture Leadership Award in 2016 and Krishi Karman Award 2014-15.
He was married to Prativa Maharathy and the couple have a son and a daughter. While the daughter is a doctor, their son has completed his BTech and MBA.
pradeep maharathy
Share FacebookTwitterGoogle+ReddItWhatsAppPinterestEmail

BJD Leader Pradeep Maharathy To Be Cremated At Puri’s Swargadwar