An overwhelmed Birendra expressed his “heartfelt thanks” to the Prime Minister.

“We athletes contribute our life to the sport and when it is acknowledged by Hon’ble PM of the country, it feels like we have really done our bit for nation-building. Heartfelt thanks to Hon’ble Narendra Modi ji for his warm gesture. The time spent with you at the interaction after Tokyo 2020 will always remain memorable,” Birendra wrote on Facebook.

Birendra, who along with fellow-defender from Sundargarh Amit Rohidas were part of the Tokyo Olympics bronze medal-winning Indian team, recently announced his retirement from international hockey.

In a touching letter to Birendra, Modi wrote: “I write this letter to express my gratitude to you for your indelible contributions to Indian hockey. You have been a key part of a vital decade for Indian hockey. You also continued the glorious tradition of Odisha of producing outstanding hockey players, particularly defenders.” 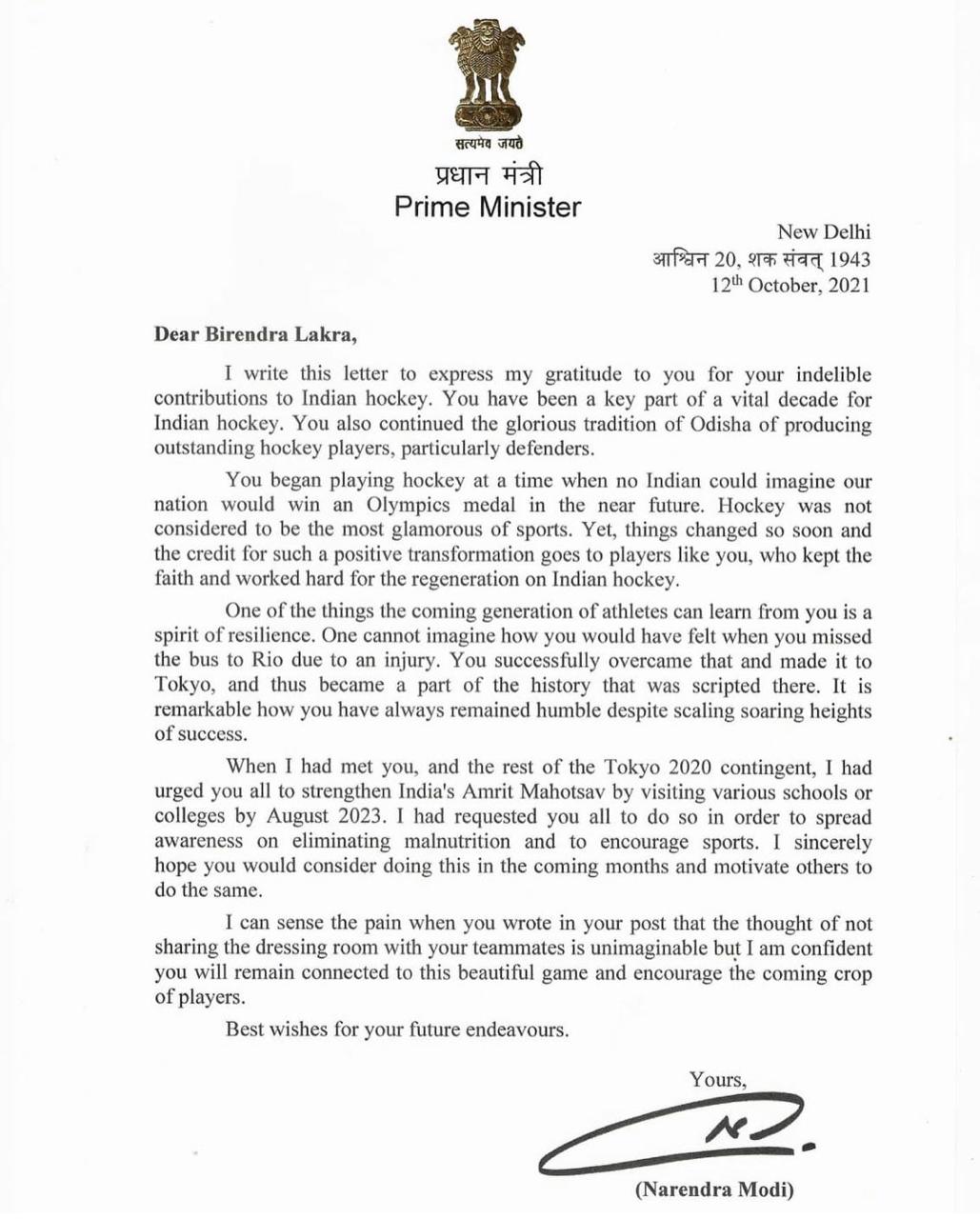 Crediting players like him for the transformation in Indian hockey, Modi wrote: “You began playing hockey at a time when no Indian could imagine our nation would win an Olympic medal in the near future. Hockey was not considered to be the most glamorous of sports. Yet, things changed so soon and the credit for such a positive transformation goes to players like you, who kept the faith and worked hard for the regeneration on Indian hockey.”

The PM observed that future generations can learn from him.

“One of the things the coming generation of athletes can learn from you is a spirit of resilience. One cannot imagine how you would have felt when you missed the bus to Rio due to an injury. You successfully overcame that and made it to Tokyo, and thus became a part of the history that was scripted there. It is remarkable how you have always remained humble despite scaling soaring heights of success.”

He urged Briendra to strengthen India’s Amrit Mahotsav by visiting various schools or colleges by August 2023.

“I can sense the pain when you wrote in your post that the thought of not sharing the dressing room with your teammates is unimaginable but I am confident you will remain connected to this beautiful game and encourage the coming crop of players… Best wishes for your future endeavours.”