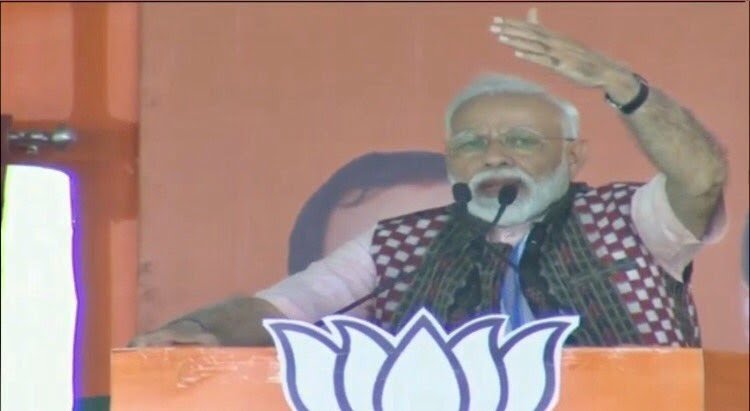 Sambalpur/Bhubaneswar: Prime Minister Narendra Modi on Tuesday saw voter turnout in the first phase of Lok Sabha and Assembly polls in Odisha as a referendum for the ruling BJP.

Addressing a Vijay Sankalp rallies in Sambalpur and Bhubaneswar, he lashed out at the BJD government in the state over “lack of development” in the state and its alleged involvement in multiple scams, asserting that the “people of Odisha have made up their mind to vote for the BJP both at the Centre and in the state”.

“It is clear from the first phase of voting in Odisha that the people have voted for the BJP,” the PM said. He followed it up with the slogan “Phir ek baar” and the crowd roared back saying “Modi sarkar”.

Raising the issue of BJP worker Manguli Jena’s murder in Khurda last Sunday at his Bhubaneswar rally, the PM said his government will provide justice to his family when it forms the government in the State. “We are committed to ending the goonda raaj in Odisha,” he said, adding, “Modi is here, you need not fear such goons”.

He maintained that the BJD government is spreading rumours against the BJP government as it is worried about losing the elections.  “I can assure you that we are not stopping any schemes as being claimed by the government here”.

He held a roadshow from Bhubaneswar airport to the rally venue in the Baramunda grounds, underlining that the tremendous response from the people showed that Odisha is voting a double-engine government of BJP both in the Centre as well as in the State.

Modi also blamed the ruling BJD for failing to judiciously utilise central allocation of funds. He alleged that brokers and middlemen were having a field day looting public money under the patronage of the BJD government.

“If only 15 paise out of 100 paise is utilised, how can this government ensure people’s welfare,” Modi asked. He also accused the state government of sending a half-prepared list of farmers to avail the benefit of the PM-Kisan scheme.

“When the Modi government will be formed at the Centre and in the state on May 23, we will ensure that all farmers of Odisha will benefit from the PM-Kisan scheme,” he said. The BJP manifesto has proposed to extend the scheme to all, irrespective of whether or not a farmer holds land.

In this context, he took potshots at the BJD government over the Kalia scheme, alleging irregularities in its implementation.

He also talked about his government’s resolve of providing pucca houses for all poor families in Odisha by 2022, complete with electricity, water and gas connections.

He alleged that despite having assets such as the Mahanadi river and Hirakud reservoir, farmers are dying for a single drop of water.

“The BJD government has been in power for 20 years. What has been the pace of development during all these years? Has Bhubaneswar developed the way it should have been?,” the PM  asked the crowd.

“Give me an opportunity to serve people of Odisha and I will show you what development is, says Modi during his public rally,” he said.

The Central government, he said has infused three lakh crore for infrastructure development in Odisha, which is five times compared to the earlier governments.

He said that this was the first time in many years when a government at the Centre was not facing any anti-incumbency factor and the opposition parties were upset and disheartened.

Hitting out at the Congress, he said the party has lost its credibility and has no mission and its leader (Rahul Gandhi) lacks a vision.