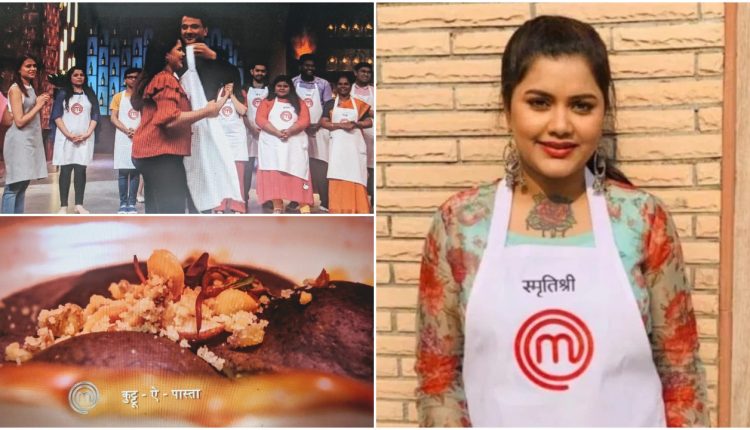 If Abhinas Nayak impressed the judges with his ‘Chicken Besara’, Smrutisree Singh sealed her position in Top 15 of MasterChef India, Season-6, with ‘Kuttu-Ae-Pasta’.

A native of Angul, she works as a General Manager in a hotel.

She got the second chance and proved herself worthy of the apron with her name embroidered on it.

Smrutisree is excited to have won the apron and also to have met chef Vikas Khanna personally. And it was he who tied the apron around her.

The 11 contestants were given 1 hour to prepare a dish from the ingredients provided to them and only five were picked from them.

They were provided three pantry — ‘Desi’, ‘Mithi’ and ‘Healthy’. A self-proclaimed fan of chef Vikas, Smrutisree picked his ‘Healthy’ pantry. The judges gave the contestants three new ingredients and those who picked them as their main ingredient were given 15 minutes extra. Smrutisree preferred to do what she knows best and not try anything new. “I know that the extra minutes which I did not take could have proved costly for me, but I tried do things fast,” she said.

Vikas also appreciated her decision to not get lured by the extra 15 minutes that the judges offered the second-chance contestants.

She made Raviolis with kuttu ka atta (buckwheat flour) and avocado and basil sauce.

While discussing the dishes being prepared by the contestants with the two other judges, Ranveer Brar and Vineet Bhatia, Vikas was all praise for her for preparing Raviolis with kuttu ka atta.  “She is amazing,” he said. Other judges too appreciated her for having taken a well-thought-out risk.

When she came to present her dish, the judges were surprised to see that she had inked the sign that Vikas had made on her arm in the audition round. Smrutisree reportedly has 12 tattoos on her body.

Vikas was first to taste her dish. “You have made a healthy dish and there is no referral to it for us. It is an Indian ready-to-eat Italian food,” he said.

When Ranveer asked Smrutisree, why she thinks she deserves the ‘MasterChef’ apron, the 26-year-old said, “I deserve it because I want the world to taste Odia cuisine and know more about Odisha.”

Chef Ranveer announced her selection in MasterChef India by calling up her mother. “Apki beti MasterChef ki hue,” he said.

Smrutisree is a hotel management graduate from the Institute of Hotel Management, Bhubaneswar.

Abhinas, who hails from Berhampur and works in an MNC, had earlier made it to the Top 10 of the cooking reality show, which is telecast on Star Plus at 9.30 PM every Saturday and Sunday.