Of Godmen And Their ‘Ungodly’ Acts 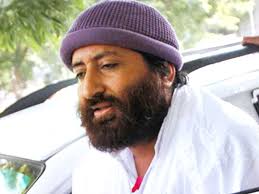 The court said it will pronounce the sentence in the case on April 30. Sai was arrested in 2013 for the rape of a Surat-based woman, his father’s disciple,  between 2002 and 2005, reports NDTV. A case was filed in 2013 after the woman and her sister approached the police.

The woman had accused Sai of repeated sexual assault when she was living at Asaram’s Surat ashram. The Quint quoted ANI as saying both the sisters accused Sai of raping them. The elder sister said Asaram Bapu, too, had raped her. The younger sister even identified the locations where she was raped by Sai.

Here’s taking a look at the state of cases against other such godmen:

Almost exactly a year ago, Narayan Sai’s father, Asaram Bapu was on April 25, 2018, sentenced to life term for the 2013 rape of a minor girl. He had been charged under relevant sections of the Protection of Children from Sexual Offences (POCSO) Act and the Scheduled Castes and Tribes (Prevention of Atrocities) Act.

Former Union minister and BJP member, Swami Chinmayanand was accused of illegally confining and raping a woman at his ashram in Haridwar in 2011. The woman had even accused him of threatening to kill her if she approached the police. The Yogi Adityanath-led BJP government had decided to withdraw the rape and kidnapping case against him, but a local court issued a bailable warrant of Rs 5,000 against Chinmayanand, rejecting the Uttar Pradesh government’s plea.

Swami Kaushlendra Prapannachari, 70, also known as Falahari Maharaj or Baba, was arrested by Alwar Police on September 21, 2017, for allegedly raping a 21-year-old intern, daughter of a devotee from Chhattisgarh. The alleged assault took place at the ashram on August 7, 2017. The rape accused godman’s bail plea was rejected in April 2018. Last September (2018), a sessions court in Alwar convicted the godman of the rape and awarded him life imprisonment, besides imposing  a fine of ₹1 lakh.

In 2010, a former disciple of Swami Nithyananda registered a complaint with Chennai Police, accusing Nithyananda of raping a former female disciple in the garb of religious practice. A case was registered at Ramanagara police under Sections 295A, 420, 376, 377, 506(i) and 120B in 2010. But in March 2018, Karnataka High Court stayed trial court proceedings against Nithyananda and his associates till it hears a discharge petition filed by him.

Self-styled godman Baba Parmanand of Barabanki, who was arrested in 2016, allegedly sexually abused childless women on the pretext of curing their infertility. He even made videos of his acts to blackmail them.

Swami Premananda of Premananda Ashram in Tiruchirapally, Tamil Nadu, was accused of raping 13 inmates and molesting two followers, besides murdering a disciple in 1994. The Supreme Court sentenced him to life in 2005 but he  passed away in February 2011 of ill health.

A special CBI court in Panchkula in August 2017 sentenced Gurmeet Ram Rahim Singh, head of the spiritual sect Dera Sacha Sauda, to 20 years of imprisonment for raping two of his female followers. In January this year, a special CBI court also sentenced him to life in jail for the murder of a journalist.