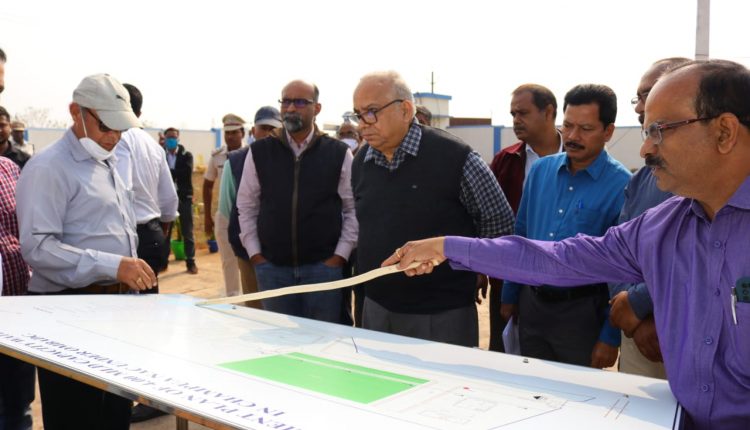 Keonjhar: Odisha Mineral Bearing Areas Development Corporation’s (OMBADC) Oversight Authority Justice Anang Kumar Patnaik is on a visit to Keonjhar to take stock of the progress of works of various developmental initiatives in the district.

The former Supreme Court judge visited 5T Transformed High School at Ramchandrapur, Ghasipura and expressed happiness over the use of technology and learning aid for imparting education.

He visited the work site of Anandapur Indoor stadium and  piped drinking water project for 19 villages in Hatadihi, a press release said.

On the first day of his 3-day visit, he interacted with the community and oversaw the works under ‘Ama Jungle Yojana’. He enquired about the possible income generating activities and advised people to engage in more diversified activities.

At the Mother and Child centre at Ghatgaon, Justice Patnaik interacted with the CDMO and enquired about the services being extended for the public. He stressed on improving the overall scenario of mother and child health care in Odisha.

He also visited Checkdam at Sialijoda, Joda Block and the agriculture activities supported by the Checkdam. He appreciated the intervention which has helped people to shift from Mining Activities to Horticulture activities. He further advised district officials to take up similar projects with maximum impact for the benefit of people.

Later in the day, Justice Patnaik visited Goat Rearing Unit at Sarupatala, Jhumpura Block and interacted with the farmers inquiring about their benefits being given to them by Department. He further inquired about the vision and way froward of the Project.

District Magistrate & Collector Keonjhar Ashish Thakare and other senior officials were present on the occasion.