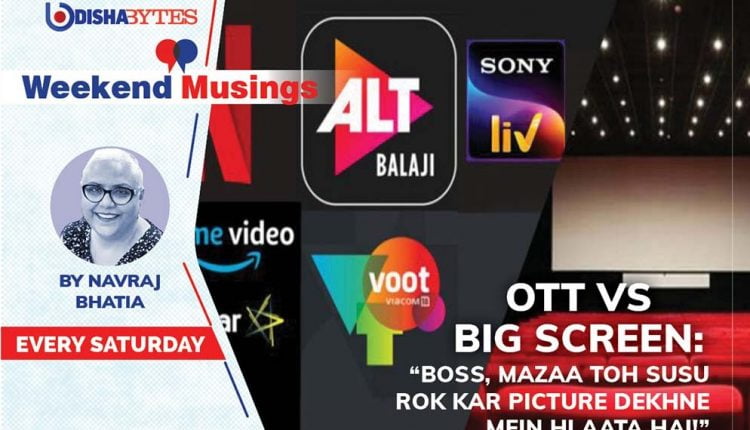 The big screen vs. small screen debate has been raging for the past two years now. The year 2020, when the coronavirus pandemic engulfed the whole world, proved to be a game-changer for the entertainment industry, with the focus shifting to the small screen.

Driven by circumstances, it didn’t take long for the Bollywood-worshipping Indian audience to shift loyalty to the OTT platform and discover a whole new world of entertainment. Although private TV channels tried to bridge the gap by re-running old favourites, clearly, the pandemic induced lockdowns stretched too long to hold the interest of the audience in old TV shows.

OTT quickly cashed in on the situation, by churning out stuff that made the locked down audience remain glued to their TV sets day in a day out with the added appeal of uncensored content. With cinema halls closed all over the country, a new era had begun. The audience, captivated in their own homes, became further captive to the small screen.

With a plethora of new storylines and talent, such has been the grasp of OTT on the pulse of the audience that today, it is considered a competitor to the film industry. The very fact that many filmmakers and actors have made a shift to the small screen is testimony to the fact.

The question now being asked is, has cinema lost its sheen? Is the game over? There is a continuous debate around this subject. True blue cinema wallahs refuse to concede defeat. While some from their fraternity have chosen to release their movies on OTT, they still swear by the big screen and are waiting for the day cinema halls will open fully to the public. Among the movies awaiting the big release are ‘Sooryavanshi’, ‘Brahmastra’ and Kapil Dev’s biopic ‘83’.

Writing about the OTT vs cinema debate, Taarun V Jain, Managing Director of Legend Group, which has recently ventured into the multiplex industry through Legend SRS Cinemas, says, “While many are now attuned to watching content online, the cinema loving audience remains true to their first love. While both these formats of content distribution are often pitted against each other, it is important to note that they both cater to different sets of audiences and offer diverse USPs. To get a clear picture of the nitty-gritty of this debate, it is important to understand the individual selling points of both these popular formats.”

Bollywood actor and producer, Ajay Devgn has a long list of films waiting in the shadows for their big releases. At a time when some stars are biting the OTT bait and opting for digital releases, Devgn weighed in his thoughts on the same.

While refusing to believe that the rise of OTT giants has rendered cinema mundane, the actor said in a recent interview that he feels both will ‘co-exist’. With high-octane action films like ‘Sooryavanshi’ and ‘MayDay’ up for their releases, Devgn said that he wants his fans to watch the films on the big screen, at the nearest theatres.

Veteran actress Shabana Azmi, who made her recently made her OTT debut with ‘Empire’ said in an interview, “I do think the digital platform is going to become even stronger because people have changed in how they view content. Films will always remain but I think the more experimental stuff is happening on the digital platform. Films will become more participatory. Audiences will be able to choose different endings, they will experience the weather, the smells etc. Big-screen films will have to develop an identity different from the digital world. For actors, it is an exciting time. So much CG and green screens are used that actors have to hone their imagination techniques. It’s like relearning.”

Tapasee Pannu, whose film ‘Thappad’ had a successful inning on OTT said in an interview, “There is a definite shift in the profile of the audience; the audience that goes to see films in theatres is different from those who see films at home. Films made for B and C centres for theatres when released on OTT would obviously not get the same response. The focus on OTT is on content-driven films. It’s an interesting shift. A new star-hierarchy will emerge if the OTT continues to dominate.”

Filmmaker Hansal Mehta said in an interview, “the big screen will always have its special charm” but OTT platforms as well as top names getting attracted towards them “is a much-needed, welcome change.” “For ages, actors’ destinies have been tied only to the vagaries of Fridays. OTT platforms level the playing field in a democratic manner, regardless of the ‘stature’ of the actors/stars. When there’s status quo about anything for such a long time, something like this (OTT) comes up to balance the equation.”

Personally, I think the magic of cinema will never die. We have been a star worshipping audience for too long and come what may, watching a movie in a cinema hall is an experience. It is an outing. Nothing can equate the joy of making a plan to watch a movie, munch one’s favourite popcorn sitting in a cushy chair. Such an atmosphere can never be recreated at home where mummyji is going in and out of the kitchen, where you can press pause to answer a phone call or the doorbell or even to answer nature’s call! Would you that in a cinema hall?

Come to think of it, there are movies within movies running in a cinema hall – a couple on a date, holding hands…. the brushing of elbows… that first kiss… where will you make such memories?