Our Never-Ending Quest For A Clean & Safe Public Toilet 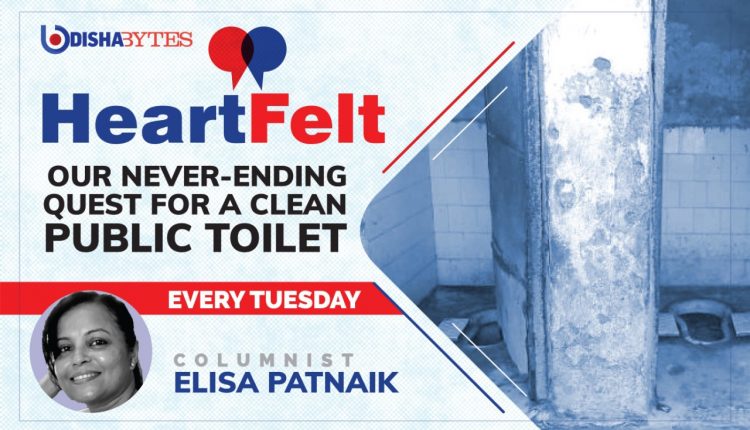 Unlike men, we women can’t do it anywhere and everywhere. We need to squat, bend, sit, manage our clothes while attending  nature’s call. We have to consider our monthly periods. Take care of a bulging tummy in case of pregnancy. And also matters of privacy and modesty. Accomplishing the most ordinary, universal and commonest of acts, for women at times becomes the most challenging of tasks. And finding a clean, safe toilet in a public place is nothing short of a small victory!

While we have achieved the milestone of open defecation free India (albeit the regular cases of defecation one witnesses here and there), the poor state of public toilets and women hygiene still remains a big challenge.

A clean and hygienic toilet with even basic facilities like clear lighting, water supply, toilet paper and soap at work places, restaurants, shopping malls, theatres, parks, educational institutions is a delight for girls and women. But sigh! As most of us know and experience, the reality is far from it.

Not to speak of the additional challenges when you are on the road. Being a journalist, a working professional and an avid traveller, journeying by road has been a frequent requirement. As a traveller, I have witnessed several changes over the years. The roads have become wider, smoother and better, the drive less bumpy and uncomfortable and it’s much easier picking up snacks and drinks from roadside kiosks. However, one thing has remained constant. The search for a clean and safe public toilet.

My adventures as a journalist and as a traveller has not been confined to the stories I was covering or the places I was visiting. It also includes the wide-ranging probable and improbable locations I have innovated as a toilet to answer nature’s call. From a roof-top enclosure while covering an election rally to cow sheds and garages, from abandoned wayside buildings to mini forests, I have done it all! All because either there were no toilets or the toilets available were too unclean and unsafe to use. Not to speak about the risks associated with Peeping Toms, insects, poor lighting and what not.

Of course with rapid progress made in sanitation, the number of toilets for women have definitely increased. While earlier, there never used to be any separate public toilets for women in fuel stations and roadside hotels, you find them in increasing frequency now. The government has also made it mandatory for petrol pumps to provide clean toilet facility on national highways.

Sadly, the toilets are either locked or too dirty to use. They lack water and are so dark inside that you struggle to locate even the toilet pan. Many a times, I prefer using an isolated road-side spot than using an unclean toilet.

While public toilets managed by civic agencies in prominent city locations are better maintained and are relatively cleaner with additional features and facilities as compared to a few years ago, there’s still a long way to go. And honestly, given a choice, many of us would avoid using them in the first place unless it’s an emergency.

While there may be more public toilets currently, the truth is also that many of them are so poorly maintained that they are barely usable.

Clean and hygienic public toilets are certainly exceptions than rules. Not just in public spaces but also in workplaces. My experience of attending several government and non-government offices in Odisha and outside have proved this beyond doubt. Though embarrassing, the first request made to the official being met is to use his or her personal toilet than the one meant for the whole office. Most of the times, a visitor cannot just use the washroom meant for the whole office.

An online survey titled ‘Say no to dirty toilets’ conducted by women empowerment organization Pinkishe and a feminine hygiene company Sanfe revealed that 90 per cent of women state that the public washrooms in the outdoor environment, be it the workplace, shopping malls or hotels, are not clean and suitable to use in the country.

Most of the travellers and shoppers admitted that holding urine is the only alternative for using dirty toilets followed by urinating in semi-squat position and wiping dirty toilets.

More than 65 per cent of the women respondents mentioned about the risk of Urinary Tract Infections (UTIs) associated with dirty public toilets. The survey also spotlighted the magnitude of the issue and the serious need for innovative and affordable solutions for a clean washroom for women. Acording to the survey, 26 per cent of women were willing to stand and pee by changing their conventional way of urinating to reduce the chances of UTI by eliminating physical contact with dirty toilet seats.

The risk of using unhygienic public toilets are too many to ignore. It’s an established fact that dirty washrooms  are key triggers for UTI in women. Failing to find clean, safe and accessible toilets time and again, women who often travel for work resort to other means – such as holding urine and not consuming enough water – to deal with the problem causing significant risks to their health. Holding urine for a long period can cause kidney stones, other severe kidney disorders and weaken bladder muscles. Not being able to change sanitary napkins during periods due to lack of access to a clean toilet also results in unsafe menstrual hygiene management.

Besides health and other practical challenges, there are serious social and gender ramifications as well. For those women not privileged, lack of access to clean and safe toilets also have an impact on their safety and work opportunities. Women construction workers, drivers, street vendors and saleswomen in  small shops etc. often bear the brunt of shortage of clean and safe toilets in their work areas.

Girls and women also face danger and violence in unsafe public toilets or lack of a public toilets. There have been cases where women have been harassed, sexually violated in dark and dingy toilets or in desolate spots while relieving themselves in the absence of toilets.

Since necessity is the mother of inventions, several female hygiene products have now flooded the market to ease and help women on the move to relive themselves safely.  Solutions like Peesafe, Peebuddy (a female urination device that allows women to relieve themselves while standing) have been gaining popularity among the educated middle class women.

We women have learnt to adapt and adopt. To pee sitting down without actually touching the toilet seat of a WC. To carry our own toilet paper, liquid soap, sanitisers. And to simply withhold the urge to urinate by not going to a dirty toilet. Pinch our nose, close our eyes and not look here and there. Or not having lot of water while travelling. Despite being aware about the adverse effects of doing so. Sadly, we teach the same ways to the next generation to practice the same.

But it’s high time the demand and murmur for a clean and safe toilet for girls and women grows louder as a basic human and health right. I recall an interesting campaign by several groups called the “Right to Pee” launched in Mumbai few years ago for clean, safe and free public toilets for women. The campaign has been demanding adequate public urinals for women in Mumbai from authorities. The ‘Don’t Hold it in’ campaign by Hyderabad Urban Lab is another initiative which demands a city where women have equal and adequate access to public toilets.

Three Children Among Five Killed In Lightning Strikes In Odisha