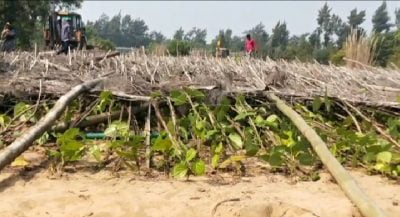 Jagatsinghpur: On the third day of resumption of land acquisition process for the proposed steel plant of JSW, measurement and demolition of betel vines were carried out in Dhinkia village of the district on Wednesday.

According to sources, the local tehsil administration deployed three teams in Dhinkia village under the same panchayat for measurement and demolition of betel vines. The owners of the vines and other people from the village were present during the process.

More than 50 betel vines were measured and 35 of those were demolished on the day. These vines belonged to Dhinkia, Mahal and Patna villages. Till date, more than 400 vines have been measured.

While the betel vines are being demolished with the consent of the owners, the villagers are submitting their necessary documents and discussing various problems at the temporary office of the company on Mahal border.

It may be noted that the land acquisition process for the project had been stopped following a clash between police and the locals opposing the process at project site on last Friday.

While several persons were injured on both sides during the clash, six persons, who have been campaigning against the proposed plant, were arrested.

Three days after the clashes, the land acquisition work for the project resumed on Monday.