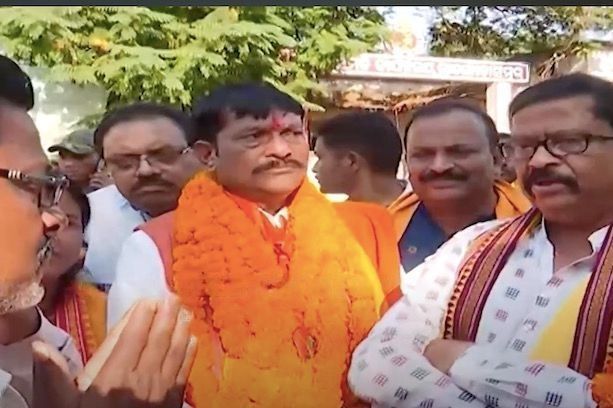 According to sources, the saffron party, upbeat after the Dhamnagar win, took out a huge rally on way to filing the nomination. When Purohit accompanied by Union Minister Dharmendra Pradhan and Leader of the Opposition in the Odisha Assembly Jayanarayan Mishra were about 100 metres from the sub-collector office, some protesting farmers, seeking crop insurance, sought their attention and requested them to support their cause.

With around 6-7 minutes remaining, Purohit decided against filing his nomination till the demands of the farmers are met.

“Pradip babu requested that he be allowed a day more for filing the nomination in view of the farmers’ agitation. He has been part of this movement and also raised the issue in the Assembly. The saffron party has been supporting the farmers’ cause and the district status demand for Padampur sub-division, a promise that the ruling party reneged on. The BJD has been trying to make a fool of the people by making false promises for the past 22 years,” said Dharmendra.

Mishra said that the decision not to file the nomination on the scheduled day was a show of support for the farmers. “Farmers are a neglected community in the state. They are entitled to benefits under Pradhan Mantri Fasal Bima Yojana. But farmers in our region are yet to receive crop insurance and input subsidy. The state government is responsible for this situation as it formed a technical committee after much delay,” he said.

Notably, the last date for filing nomination papers is November 17 while scrutiny of the papers will be held on November 18. Candidates can withdraw their nomination by November 21.

Meanwhile, the all-party meeting chaired by the Chief Electoral Officer has decided that voting for bypoll, which is slated for December 5, will be held from 7 am to 4 pm. The polling duration was reduced in view of the winter season and Maoist threat, sources added.

Odisha Bypoll: Padampur To Vote From 7AM To 4PM On Dec 5