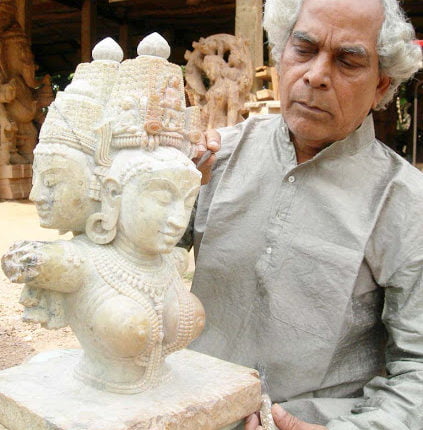 Bhubaneswar: Well-known sculptor from Odisha Sudarshan Sahoo is among the 7 Padma Vibhushan awardees, whose names were released by the Centre on Monday.

Other Odias in the list for Padma Shri Award are Rajat Kumar Kar and Nanda Prusty for their contributions in the field of Literature and Education; Shanti Devi for social work; Purnamasi Jani in the field of art and Dr Krishna Mohan Pathi for medicine.

Born on 11 March, 1939 in Puri, Sahoo acquired the artistic skill of traditional sculpting under the tutelage of Guru Bhubaneswar Mohapatra and Guru Kunia Moharana of Puri Town.

He developed the Sudarshan Crafts Museum, Puri in 1977.  He was also the recipient of Padma Shri in 1988 and was honoured with the Shilp Guru Award in 2003.

He promoted the Gurukul system of learning when he established Sudarshan Art and Crafts Village, Bhubaneswar in 1991 with the help of the Government of Odisha. The institution is a Training and Creative Centre where artists are involved in the making of traditional sculptures made up of stone, wood and fibreglass sculptures.

His works can also be seen at the famous Dhauli Peace Pagoda, on the outskirts of the city. The panels on Buddha’s life, created by him, have been installed at the Pagoda.

His works have travelled far and wide. From the Japanese city of Atami where a panel sculpted by him was installed in 1978 to the stone panel on Buddha’s life installed in the industrial township of Milton Keynes near London in 1980. He also sculpted a panel for Hanaokayama Peace Pagoda in Japan.

This year the President has approved 119 Padma Awards including 1 duo case (in a duo case, the Award is counted as one). Seven Padma Vibhushan, 10 Padma Bhushan and 102 Padma Shri Awards were awarded this year.

These awards are conferred by the President of India at ceremonial functions which are held at Rashtrapati Bhawan usually around March/ April every year.