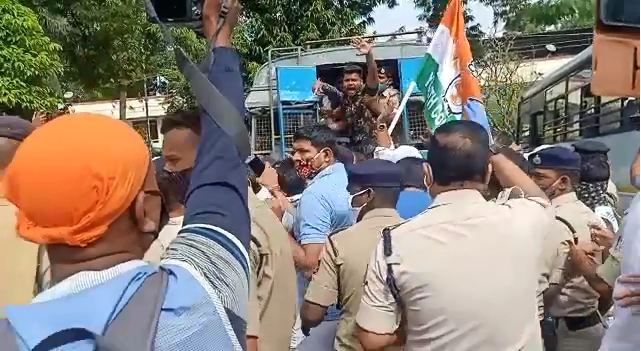 Bhubaneswar: The outrage over Pari murder case spilled over to the streets as opposition BJP and Congress took out rallies in the city on Friday demanding ouster of minister Arun Sahoo for his alleged involvement in the case.

Rejecting the SIT probe into the cases announced by chief minister Naveen Patnaik, BJP said they had demanded CBI investigation and resignation of Sahoo. Protesting the government’s indifferent attitude towards the case, BJP activists took out a rally from the party office to the Odisha Assembly. There was a scuffle between the agitators and police after the latter stopped them near Lower PMG square.

Similarly, a group of Youth Congress members were stopped during their march towards the Odisha Assembly. The police stopped them near the Lower PMG Square.

Later, several Youth Congress members including their president Smrutiranjan Lenka were taken into preventive custody by the police. The party leaders have demanded the expulsion of minister Sahoo and threatened to continue with their agitation till justice was done to Pari.