Kochi: No sooner did the picture of a police official squatting over a young protesting Congress worker, Antony, pinning him to the ground surfaced on social media, users started equating it with the unfortunate incident of George Floyd, a black American, who was killed in Minneapolis, US, on May 25, 2020.

Antony and Youth Congress workers took to the streets on Sunday evening and protested against Kerala Higher Education Minister KT Jaleel demanding his resignation after he was questioned by the Enforcement Directorate.

While some protesters were chased away by the police manning the roads, Antony fell down and when he was trying to get up, a police officer kept him pinned to the ground till Jaleel’s convoy passed. Following this, Antony’s colleagues came rushing seeing the incident and he was rescued.

The image first surfaced on the internet as state Congress vice-president and two-time legislator PC Vishnunadh said it was indeed shameful for the Kerala Police, for what happened. “Just see the cruelty that was shown to one of our young activist Antony, who turned into a victim of police high-handedness, as literally a replay of what happened in the US was played out,” said Vishnunadh.

A Congress MLA of Thrithala constituency, VT Balaram took to his Facebook handle condemning the brutal act which was captioned: ‘Citizen and Pinarayi government’ 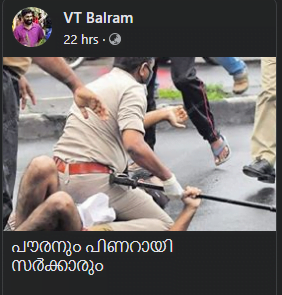 SSR Case: CBI Report To Be Out Soon, To Be ‘Conclusive’ With ‘No Confusion’

Over 5 lakh PPE Are Manufactured Every Day In India: Union Health Minister