Cuttack: Challenging the decision of Odisha government to close all religious institutions, including the Jagannath temple in Puri in its Unlock-4 guidelines, Cuttack-based advocate Jayanta Bal on Tuesday filed a second PIL in the High Court.

Bal prayed to the court to urgently intervene and direct the state government to reconsider its decision.

In his earlier PIL, filed on August 6, Bal had argued that if the state government allowed reopening of malls, fitness centres, gyms, yoga centres, liquor shops and public places, there is no reason to stop devotees from visiting Jagannath temple and other religious places.

The temple sevayats under the aegis of the Odisha Mandir Sevayat Sangh have also made a similar request to Chief Minister Naveen Patnaik. 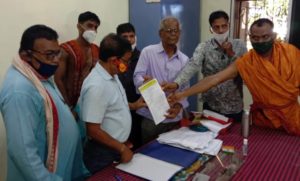 In a letter to the Chief Minister through the Endowment Commissioner, secretary of the Sangh Jyoti Shankar Khuntia said while the state government in its Unlock-4 guidelines has allowed the reopening of business establishments, government offices, liquor shops, tourist destinations including Sun Temple at Konark, congregation of 100 persons in social functions and lifted night curfew in the state, it has sadly ignored the plight of sevayats whose livelihoods are at stake due to the prolonged closure of the religious institutions.

While requesting the Chief Minister to allow reopening of the religious institutions with strict adherence to COVID-19 guidelines, Khuntia said that the sevayats in the state have begun a three-hour indefinite dharna from 9 am to 12 pm in front of the temples every day with effect from Monday, till their demands are met.