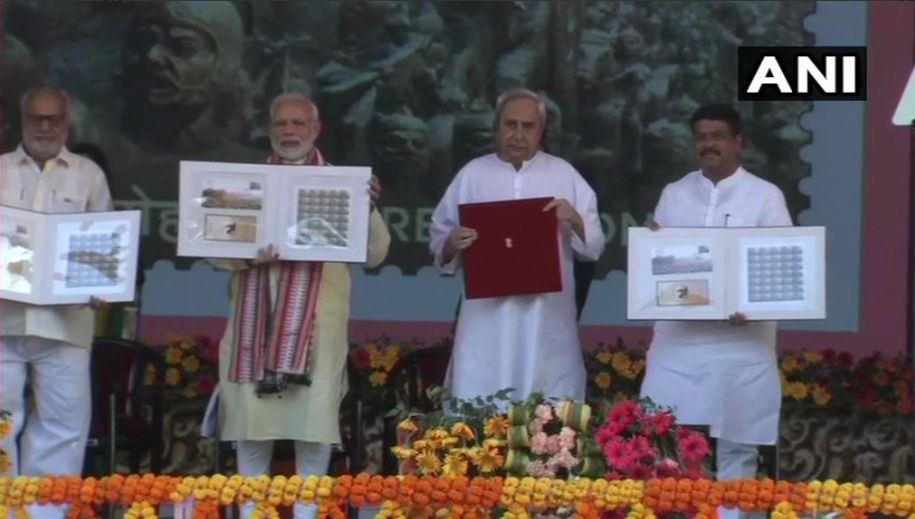 Khurda: Prime Minister Narendra Modi on Monday expressed anguish saying that despite all possible assistance by the Centre, there is no momentum in the development of Odisha.

Addressing a public meeting at the National Institute of Science Education and Research (NESER) stadium on the outskirts of Khurda town in the afternoon, he said while the other states have made a rapid stride in the Swachh Bharat Abhiyan, Odisha has lagged far behind.

The Prime Minister also wanted to know as why in Odisha the youths are compelled to leave their state, the children are the victims of malnutrition and the farmers of the state are struggling for water.

Stating that there has been rampant corruption in Odisha, he said the state government is yet to take stern action against those who are involved in the massive chit fund scam and claiming percentage in all project works in the state.

He also said the people of Odisha are deprived of the benefits of the Pradhan Mantri Jan Arogya Yojana as the state government is yet to implement this scheme. “While about six lakh patients have been benefited by this scheme since its implementation, it is a matter of utter regret that not a single patient of Odisha has been able to avail the benefit of the programme till date,” Modi pointed out.

Referring to the agriculture sector, the Prime Minister said while the Centre is trying its best to improve the livelihood of the farmers, the Odisha government has completely failed in ensuring the socio-economic livelihood of the farmers. “The state government that had promised to provide irrigation facility to 10 lakh hectares of land, has been able to provide irrigation to only 22,000 hectares,” he observed.

Praising the people of Odisha, Modi said “We always feel your blessing. We need your blessings to realise the goal of sabka saath sabka vikash.”

Addressing the gathering, he said “The massive congregation here gives me the feeling that the people of Odisha need a change in the government.”

Political experts have said the Prime Minister seemingly took the middle path, mixing caution and aggression while criticising the BJD dispensation in Odisha. In view of the defeat of the BJP in the recent Assembly elections in Rajasthan, Chhattisgarh and Madhya Pradesh, Modi posed unpleasant questions to the state government without uttering the name of Naveen Patnaik in his address at the public meeting, they pointed out.

They said the speech of the Prime Minister was markedly different from his scathing attack on the BJD government at rallies in Talcher and Jharsuguda on September 22 this year.

The apparent change in stance of the Prime Minister towards Naveen is being viewed in political circles as a possible move to keep the BJD in the good book keeping in view the possibility of a fractured mandate in the ensuing Lok Sabha and Assembly elections scheduled next year.