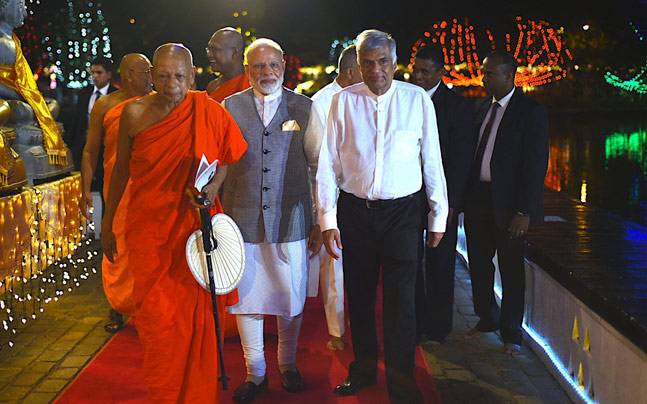 Modi is the first foreign leader to visit Sri Lanka after the deadly Easter terror attacks in April. His visit is considered as a sign of India’s affirmation of solidarity with Sri Lanka in the aftermath of the attacks.

“Met President @MaithripalaS, our second meeting in 10 days. President Sirisena and I agreed that terrorism is a joint threat that needs collective and focussed action. Reiterated India’s commitment to partner with Sri Lanka for a shared, secure and prosperous future,” Modi tweeted after his talks with Sirisena.

External Affairs Ministry spokesperson Raveesh Kumar said that the two leaders discussed bilateral issues of mutual interest. A banquet was hosted in honour of the Indian Prime Minister by the Sri Lankan President.

Earlier, Modi’s entourage made a detour to St Anthony’s church – one of the sites of the horrific Easter Sunday attacks –on its way to the Presidential Secretariat, where a red carpet welcome awaited.

Modi paid tributes to the victims of the deadly terror strikes at the church and said the “cowardly acts of terror cannot defeat the spirit of Sri Lanka”.

All That Matters Is Politics, Stupid!

Odisha CM Speaks To PM, Extends Support In Fight Against…